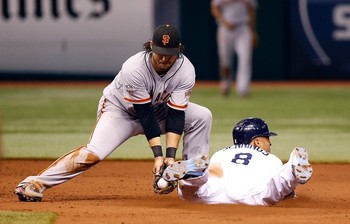 The Tampa Bay Rays placed center-fielder Desmond Jennings on the 15 day DL with a fractured middle finger on his left hand.

Jennings hurt the finger Saturday on a slide against the Giants in extra innings and it was thought to be a relatively minor sprain.

Jason Bourgeois was recalled from Triple-A Durham to take his place on the roster.

Sam Fuld played center field for Tampa Bay on Sunday and could find himself in platoon situation with  Bourgeois.