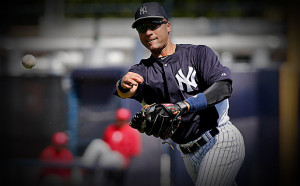 New  York Yankees shortstop Derek Jeter has been diagnosed with a right calf strain and may require another stint the on disabled list.

An MRI was performed on Saturday where a Grade 1 calf strain was revealed.

The Yankees have not made a decision on whether Jeter, 39, is headed back to the disabled list.

Jeter said he first felt the injury on Monday, the morning after his first game back from his latest DL stint for a strained right quad.

“It feels like you were hit with a ball or something,” he said. “It’s like a deep bruise, maybe. That’s the best way to put it. I don’t know how else to describe it.”

The Yankees are 9 1/2 games behind the division leading Boston Red Sox . As for retuning to the disabled list, “I’ll see what they say,” Jeter said. “It’s up to them. Of course, I’d like to not do it, but I understand any situation that they have.”