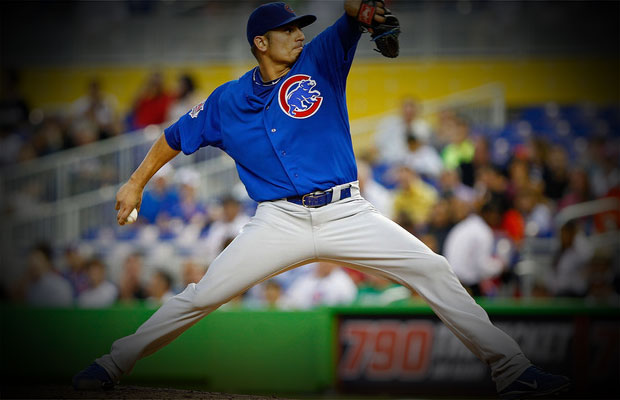 The Texas Rangers acquired right-handed starter Matt Garza from the Chicago Cubs  for prospects C.J. Edwards, Mike Olt  and two other prospects that have yet to be named.  Gaza has pitched to a 3.17 ERA this season over 71 innings and will be a free agent at the end of the season.

Olt was #43 on the BA top 100 list heading into the 2012 season, and was #22 before this season, but his struggles earlier this season, stemming from vision issues, appear to have resulted in him dropping in the rankings and has hit .218/.318/.438 at Triple-A Round Rock.

The trade of Garza would be the Cubs’ third of July, with more deals expected. Left fielder Alfonso Soriano, right fielder Nate Schierholtz, closer Kevin Gregg and left-handed reliever James Russell are among the other Cubs in play.

The Los Angeles Dodgers, Boston Red Sox, Arizona Diamondbacks, Cleveland Indians and St. Louis Cardinals were among the other clubs that expressed interest in Garza, but all were reluctant to meet the Cubs’ price for a rental of two-plus months, sources said.