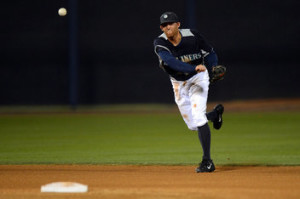 The Seattle Mariners have promoted shortstop prospect Brad Miller from Triple-A Tacoma, who will join the big league roster in time for a series against the Chicago Cubs.

Miller will become the new starter at short for the Mariners, as Brendan Ryan will be moved into a backup role and Carlos Triunfel will be sent down to Tacoma to free up a spot on the 25-man roster.

The second-round draft pick in the 2011 MLB Amateur Draft out of Clemson University, Miller has impressed the Seattle organization with his bat over the past two seasons in the minors.

Miller has continued that success into this season with both Double-A Jackson and Triple-A Tacoma, having gotten the Friday call-up after hitting in 22 straight games for the Tacoma Rainiers, which was capped off by a home run last night.

Questions have surrounded the skill level of Miller’s defense at short, as he has been prone to make mistakes on routine plays and does not appear to project as an everyday shortstop at the next level.

However, the Mariners appear to be more than content with their move as Seattle should serve as a better environment for Miller to improve his defensive skills and overall focus, not to mention the fact that Brendan Ryan should serve as a great mentor for the young shortstop.

Either way you look at it, Miller has the bat to make it as a solid everyday player at the big league level and with that being said, the Mariners will be able to see how he handles serving as the everyday starting shortstop for the rest of the season. If everything goes according to Seattle’s best wishes, the Mariners may be looking at their shortstop of the future.