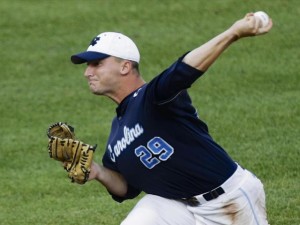 Unlike the College World Series opener that saw the NC State Wolfpack serve up a rout of the North Carolina Tar Heels, Thursday night’s game served as redemption for the Tar Heels, as they shut down the Wolfpack in a 7-0 victory, advancing further in Omaha while the Wolfpack will be sent packing.

North Carolina would follow up in the fifth with another run, this time on an RBI single by Colin Moran that scored Parks Jordan.

Following the fifth, NC State staff ace Carlos Rodon was pulled from the game after throwing 80 pitches. Prior to the game, Rodon was given the last minute nod over Brad Stone, as the Wolfpack ace was originally scheduled to throw a bullpen session on Thursday; however, Rodon would be given the ball and be held to a pitch count of around 75 due to short rest.

Over five innings of work, Rodon surrendered two runs (one earned) on four hits and struck out six batters while walking one. Rodon threw his fastball consistently in the mid-90s, but was noticeably less commanding than in the opener in which he threw a complete-game gem against the Tar Heels.

The Tar Heels would open the door in the eighth with a four-run effort and subsequently slam that door on the Wolfpack for the eventual victory. A Michael Russell two-run single gave North Carolina a 4-0 lead, to be followed by a two-run double by Mike Zolk, scoring Skye Bolt and Russell to cap off the inning. All three runs would be charged to Brad Stone, who was originally slated to start the game.

Moran would add an RBI single in the top of the ninth to give the Tar Heels a 7-0 lead, as North Carolina starter Hobbs Johnson would lead the charge into the bottom of the ninth.

Johnson pitched a strong game, working 8 1/3 scoreless innings before being pulled with one out in the ninth after surrendering base hits to Tarran Senay and Brett Williams. Chris McCue would enter the game in relief of Johnson, getting Bryan Adametz to line out into a double play to end the game.

With the victory, North Carolina will play their third straight elimination game of the College World Series as they face off against the UCLA Bruins on Friday (in order to advance to the best of three games championship series, the Tar Heels will need to beat the Bruins on Saturday as well, due to the double elimination format).

As for NC State, the Wolfpack becomes the fourth team to exit the College World Series, closing out a season in which they posted an impressive 50-16 record and made the trip to Omaha for the first time since 1968.