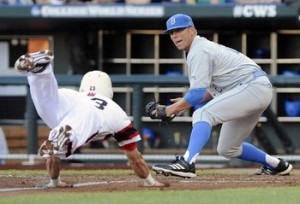 After a surprising, yet impressive victory over the LSU Tigers on Sunday (which would ultimately lead to the Tigers’ elimination on Tuesday), the UCLA Bruins continued with a 2-1 victory over the NC State Wolfpack, inching their way closer to the College World Series championship series.

The Wolfpack struck first, starting off the the third inning with the bases loaded, wherein Trea Turner would rip an RBI single to left field, scoring Bryan Adametz and giving the Wolfpack an early 1-0 lead.

Despite being held scoreless for the first four innings, UCLA would rebound in the top of the fifth with a two-run charge led by a Kevin Kramer RBI single that scored Cody Regis, followed by a wild pitch by Wolfpack reliever Grant Sasser that allowed Brenton Allen to score, giving the Bruins a 2-1 lead.

The game would witness no further scoring from the fifth inning on, as both teams would witness solid pitching from their bullpens (and in UCLA’s case, a valiant performance from starter Nick Vander Tuig).

Vander Tuig was masteful, working seven strong innings, surrendering just one run on four hits while striking out six and walking none.

Vander Tuig handed the ball off to David Berg in the bottom of the eighth, who has been a key cog for the Bruins throughout both the regular and post seasons. Berg worked two scoreless innnings, fanning three batters and closing out the game for the Bruins, as they upended the Wolfpack by a 2-1 score.

With the victory, the Bruins will now face the winner of Thursday’s elimination game between NC State and North Carolina on Friday, looking to move closer to their first NCAA title in school history.