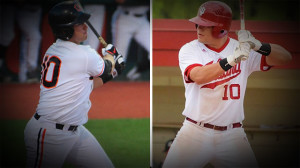 The Oregon State Beavers (51-12) and the Indiana Hoosiers (49-15) will be looking to avoid elimination from the 2013 College World Series in the only game of the day at TD Ameritrade Park  in Omaha, Nebraska. The game will air live on ESPN. Mike Patrick (play-by-play), Orel Hershiser (color) and Jessica Mendoza (field) will broadcast the game.

After losing to Mississippi State 5-4 in game one of this year’s College World Series the Beavers rebounded in a loser’s bracket game against the Louisville Cardinals 11-4 . Matt Boyd, 10-4 record with a 2.18 ERA, is expected to start for Oregon State having pitched in relief in the loss against Mississippi State.

“I’ve been chomping at the bit for the next time I get out there,” Boyd said after Tuesday’s practice at Bellevue East High. “Really looking forward to Wednesday.”

Oregon St who was a pre-toruanment favorite will need  three more elimination-game victories to reach the best-of-three championship series, which begins Monday.The Beavers are 15-5 in elimination games under head coach Pat Casey.

Oregon State usually plays well with their backs against the wall and will need to do so again.

Aaron Slegers (9-1, 2.13 earned run average) will get the start for Indiana and has not pitched in the first two games in Omaha.  a key for Indiana will be to keep mistakes and a minimum having committed 11 errors in tournament play.