The New York Yankees are in need of a shakeup at the major league level even if it is mainly on offense. The Yankees have an above average pitching staff but an anemic lineup, and with so many players headed to Free Agency, will need to make a lot of decisions as they approach the trade deadline.

While players like Mariano Rivera, Andy Pettitte and Hiroki Kuroda represent no trade value since they stand very little chance to allow any move, New York does have two main trade pieces in Joba Chamberlain and Phil Hughes. Both players have been inconsistent this season and both are in their contract years.

Still, as a starter and reliever, they can sure up a bullpen or a rotation and can be dealt to an NL contender if necessary in a month or so. More importantly, if the Yankees are still in a playoff race by then, New York can absorb the blow of dealing both players due to the depth the team has in the rotation and the bullpen.

Vidal Nuno, Adam Warren, Ivan Nova and the nearly rehabbed, Michael Pineda, all supply rotation depth to take Hughes’ spot. While some of those guys can also be used in the bullpen (the former three have all thrown bullpen innings for the big league club this season), New York can turn to two additional arms from the minor league system who will be MLB ready before the season ends. 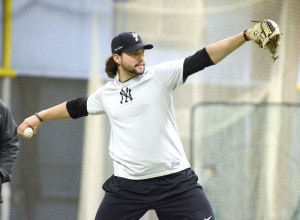 Tom Kahnle and Mark Montgomery can both be called up before the end of the 2013 season and both pitchers are performing well in the minor leagues right now.

Kahnle, the lesser known 23-year-0ld righty, is currently in AA and looks to be having a breakout year as the 5th round pick for New York in 2010.

Kahnle’s fastball is his best pitch and he’s been topping out around 97 miles per hour, posting a 1.88ERA and .163 BAA for AA Trenton this season in 28.2 innings.

Adding 32K and a miniscule 1.05 WHIP implies Kahnle is a power reliever, but will have to rid himself of control problems once and for all before he’s called up. Currently, 14 walks would not project well at the MLB level where hitters are more selective and likely to get on base more via hits. 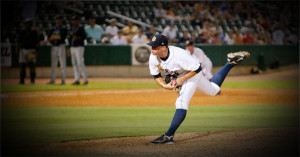 Montgomery is slightly more polished and at AAA Scranton and while Kahnle is currently the 18th best Yankees’ prospect, Montgomery comes in around 8th overall.

The future closer is just 22-years-old, but has been pitching well in AAA all season. The righty has a 3.00 ERA, but 29 hits, 36K and just three homeruns in 30 innings is promising. Of course, Montgomery has also walked 20 and sports a 1.63 WHIP.

Like Kahnle, Montgomery will need to walk less hitters, but a fastball around 93 miles per hour and one of the best sliders in all of the minor leagues is a promising 1-2 punch, capable of retiring big league hitters as early as this season if necessary.