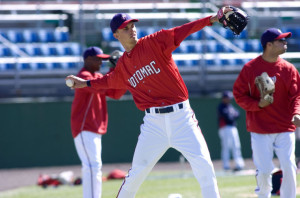 A.J. Cole has been quite the interesting prospect for the Washington Nationals since being drafted in the fourth-round (116th overall) of the 2010 MLB June Amateur Draft.

Coming out of Oviedo High School (Florida), Cole was heralded as a first round prospect, but a strong commitment to the University of Miami caused many teams to shy away from taking him with their first picks.

Washington took a chance in the fourth round and signed Cole for an unprecedented $2 million, the highest signing bonus ever given to a fourth round draft pick.

The fact that the Nationals were willing to dish out $2 million on a fourth rounder leads one to believe that they were impressed by what Cole had to offer, which is what the Nationals hope is a future front of the rotation starter.

His first season in the Nationals organization was riddled by up-and-down performances, the down being a 4-7 record and 4.04 ERA in 89.0 innings of work (respectable numbers at that for prep star in his first season in professional ball) and the good being a strong 108/24 strikeout to walk ratio, as well as 10.92 SO/9.

Despite an inconsistent season, the Nationals could at least find solace in the fact that Cole could create swings-and-misses with his pitch arsenal.

Cole’s time in Washington would be short-lived as he would be included in a trade to the Oakland Athletics that brought Gio Gonzalez to the Nationals in 2012. In his first eight starts with High-A Stockton, Cole struggled, posting an 0-7 record and 7.82 ERA in 38.0 innings.

A demotion to Low-A Burlington would prove to be the remedy for Cole, as he displayed much of the talent that garnered him attention prior to the 2010 Draft.

However, Washington would experience “round two” with the young right hander, as Cole was traded back to the Nationals following the 2012 season. In 13 starts with High-A Potomac this season, Cole has once again put up an inconsistent showing, but still possesses the pitching ability that Washington is positive will translate to a frontline starter at the next level.

Over his past two starts, however, Cole has been dominant. On June 8, Cole went six innings and surrendered just one run on three hits, striking out a season-high 11 batters and walking two. Five days later, Cole would follow up with an even stronger performance, working seven scoreless innings and striking out 10 batters en route to his second victory in less than a week.

In terms of stuff, Cole has the make-up of a front of the rotation starter. He possesses an electric fastball that consistently sits in the mid-90s with effective movement, along with a power curveball that he throws hard and a changeup with solid fading action.

He appears to have a comfortable feel for his three primary pitches, as has been showcased through his plus strikeout rate this season, which suggests (with further development of his secondary offerings) that he should have a rather easy transition to the big leagues.

Overall, Cole has had a season that is reminiscent of his first season with Low-A Hagerstown, posting a 4-2 record and 4.16 ERA in 71.1 innings of work. However, he has displayed flashes of brilliance at a much more consistent rate than in past seasons, which is a positive sign for the Nationals who have invested both time and money in grooming Cole into a future anchor of the starting rotation.

For now, only time will tell whether Cole will be able to right the ship down a path of consistency and develop into that future frontline starter that Washington envisioned just three short years ago.