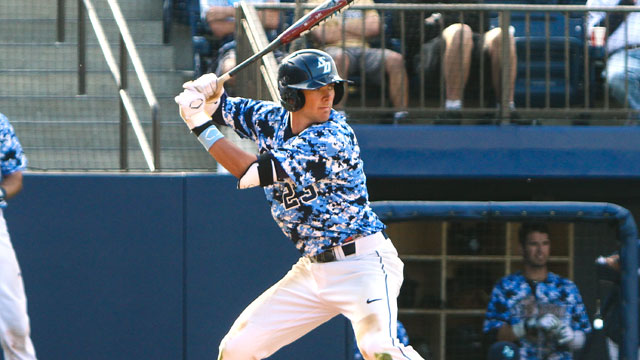 Kris Bryant, the second-overall draft pick by the Chicago Cubs in the 2013 MLB First-Year Player Draft out of the University of San Diego, was awarded the Dick Howser Trophy on Saturday.

The award is annually given to the college player that best represents “courage, character, leadership, and performance,” as determined and voted on by the National Collegiate Baseball Writers Association.

Bryant, the top power hitter and overall prospect in this year’s draft, was humbled to receive the honor on Saturday.

“This summer keeps getting better for me,” Bryant said. “What an honor. Hearing what they said about Mr. Howser, this has got to be one of the greatest trophies I’ve won in my life.”

San Diego head coach Rich Hill pointed out features of Bryant’s game and the manner in which he approaches his game that suggest exactly why Bryant was selected as the recipient of the Dick Howser Trophy.

“You saw the stats and we’re rattling off all the OPS and slugging and everything else, and that’s all great,” Hill said. “The chapters are going to be written on him for years to come, but the character is off the charts, and the leadership and the courage. There’s one thing that sticks out: sacrifice. He works really hard and wants to be the best. That and everything else makes him very special.”

Bryant has already been named the Louisville Slugger National Player of the Year and is currently one of three finalists for the Golden Spikes Award, given to the best amateur baseball player each year.