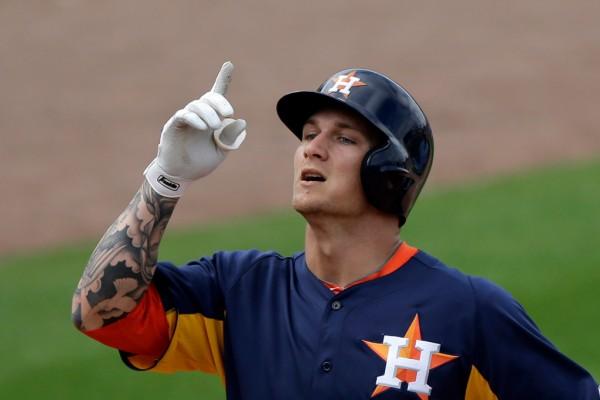 Brandon Barnes has been performing well in centerfield during Justin Maxwell‘s DL stint with a hand injury. The 27-year-old is hitting .271/.326/.729 with three home runs and 15 RBI this season and Houston Astros Manager Bo Porter may want to keep Barnes there even after Maxwell’s return.

Porter told reporters, “I’m going to say that he will start. I’m not going to say it will be at center field”. The Astros’ manager expanded on his explanation by adding, “Brandon Barnes has done a great job there. He will warrant some continued playing time. That’s why we’ve had Maxwell play some places beside center field during his rehab assignment].”

Barnes is still young but not considered a prospect, more importantly has been playing solid defense and is making the major league minimum so it figures he is an excellent short-term solution as long as he continues to perform for the center field spot. Maxwell offers more versatility and can play all three outfield positions.

He may figure prominently in right field field where current starter, Jimmy Paredes has struggled mightily at the plate. Paredes has just 80 at bats this season but is hitting .190/.242/.516 and has struck out 31 times already.

Paredes is still young, just 24-years-old, but can use some more seasoning in the minors upon Maxwell’s return. Maxwell was hitting .234/.289/.679 in a span of 77 at-bats but at 29-years-old offers more of a veteran presence and roster flexibility for the cost conscious Astros.

While players like Paredes figure to play key roles in Houston’s future, it’s pieces like Barnes and Maxwell who offer a cost-conscious present day alternative for the 2013 outfield.