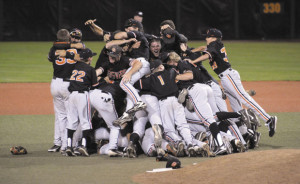 The Oregon State Beavers advanced to their fifth College World Series on Monday night, holding off Kansas State in a 4-3 victory in game three of the Corvallis Super Regionals.

The Beavers jumped out to an early lead on a two-run home run by Danny Hayes in the second inning, a 2-0 lead that would become a 4-0 lead after the top of the fifth.

Kansas State would attempt a late-inning comeback, scoring one run in the bottom of the sixth and two runs in the eighth off of Beavers starter Ben Wetzler. However, staff ace Matt Boyd, after throwing 123 pitches on Saturday, came into close out the game and cement the Beavers’ trip to Omaha.

Boyd pitched 1 1/3 scoreless innings, closing out the game for Oregon State. The key play of the game was a Michael Conforto outfield assist at the plate, as the Beavers slugger threw out the Wildcats Blair DeBord at the plate and preserved a 4-3 lead, ending the two-run inning by the Wildcats.

A strong all-around effort by Oregon State allowed the Beavers to advance to their first College World Series since 2007. The number three ranked Beavers look to bring home their third NCAA title in school history, having won back-to-back titles in 2006 and 2007.