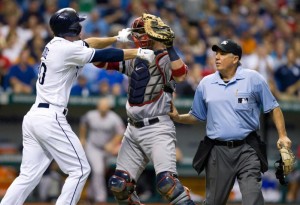 The Tampa Bay Rays rallied from a six-run deficit against the Boston Red Sox, then rallied again down two runs in the 10th inning and eventually lost a heartbreaker 10-8 in 14 innings in the first game of a three-game series at Tropicana Field.

The game took 5 hours, 24 minutes to play, making it the second longest game in Rays history. While the game had several dramatic moments the talk after the game was John Lackey  deciding it was appropriate to plunk right fielder Matt Joyce in the middle of the back in the sixth inning.

Lackey  was noticeably upset walking off the mound at the end of the second inning, shouting towards the Rays dugout. Joyce  who had homered in the first lined a 3-0 pitch foul and apparently drew the ire of Lackey for dropping his bat after swinging at the pitch.

Lackey then hit Joyce with two outs in the sixth in the back, and as Joyce walked slowly up the first base line shouted at Lackey, Jarrod Saltalamacchia intervened and both benches emptied, with no visible punches thrown.

Both teams were warned and “play ” resumed.

Afterwards Joyce said it was “very obvious” and a “pretty bush league move” by Lackey.

Rays manager Joe Maddon, never one to back down from a post game comment said,  it was “inappropriate” and an example of Lackey being “a bad teammate” and he could have been ejected. “I really did sense among the group of Red Sox that they were totally not into that moment because they knew it was inappropriate to hit Matt on purpose, and furthermore because one of them can get hurt,” Maddon said. “So that’s being a bad teammate as far as I’m concerned. In the past, he was always a good teammate. That was really a bad moment for him tonight.”

For his part Lackey claimed the pitch was not intentional, that he was “trying to come in there and get him off the plate,”

The two teams resume the series tonight with Jon Lester taking the mound for Boston and Roberto Hernandez for Tampa Bay.