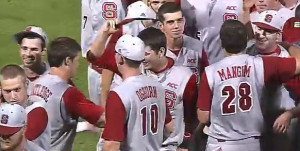 After a Friday weather delay in Raleigh, game one of the Raleigh Super Regional would be pushed to Saturday. NC State would take game one by a score of 4-3, jumping to a quick 1-0 lead and placing Rice on the precipice of elimination from the NCAA Tournament.

However, neither Rice nor mother nature would allow NC State to advance to the College World Series easily.

Rice would take an early lead in game two, as Christian Stringer would blast a solo home run in the first inning and would follow with another solo shot in the sixth, giving the Owls a 2-0 lead.

NC State would counter with a run in the top of the seventh, though Rice DH Michael Aquino would extend the lead to 3-1 on a solo homer in the bottom of the frame.

Rice would tack on another run in the bottom of the eighth, cementing a 4-1 lead and pushing NC State to the edge of elimination heading into the top of the ninth.

However, NC State would not go down without a fight, as a two-run double by Jake Fincher and an RBI double by Tarran Senay would even the score 4-4, forcing the game into extra innings.

The tenth inning would come, however, the weather had other plans, as the game would be delayed for the second time in the series. The game would resume and a marathon would soon ensue, as strong bullpen performances by both teams would hold the offenses scoreless for the next six innings.

In the top of the 17th inning, with Tarran Senay on base, Brett Williams ripped a double to center field, advancing Senay to third; however, an errant throw by right fielder Michael Ratterree would allow Senay to score, giving the Wolfpack a 5-4 lead.

Ethan Ogburn would close out the bottom of the frame, cementing the victory for the Wolfpack and punching their ticket to their first College World Series since 1968. Ogburn pitched masterfully in relief for the Wolfpack, going five scoreless innings and striking out six batters.

NC State will face the winner of the Chapel Hill Super Regional, as North Carolina and South Carolina battle for a CWS berth.