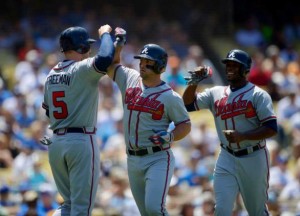 A dreary season for Atlanta Braves second baseman Dan Uggla became a bit brighter on Sunday afternoon, as he led the charge with two home runs in Atlanta’s 8-1 victory over the Los Angeles Dodgers at Dodger Stadium.

The Braves would score seven of their eight runs between the third and fourth innings, led by Uggla’s three-run homer in the third, which gave the Braves a 4-1 lead. Uggla would follow up with a solo shot in the fifth, extending Atlanta’s lead to 8-1.

Atlanta starter Mike Minor continued his strong season, earning his eighth victory of the season in a six inning effort in which he surrendered just one run. Minor now boasts an 8-2 record and 2.44 ERA, as well as a strong 78/17 strikeout to walk ratio in 84 2/3 innings of work this season. The former Vanderbilt southpaw currently ranks third in WHIP (0.94) and fourth in wins (8) amongst National League starters.

The Braves extended their lead in the NL East to eight games over the Washington Nationals, improving to a 39-24 record, which ranks as the second-best record in the National League behind the St. Louis Cardinals (40-22).