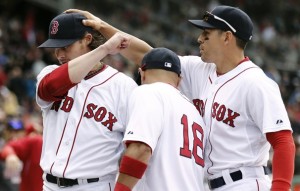 Clay Buchholz had pitched into the seventh inning on 104 pitches and left the game with a stiff neck. The Red Sox went on to beat the Los Angeles Angels 7-2  to split a day night doubleheader.

“I think that ball knocked my glove off,” he said, adding that when he spun and threw to first he irritated his neck. “It was a little nagging for a couple of innings, right after that ball hit off my glove and I threw to first, it bothered me.”

Manager John Farrell doesn’t think the neck issue is anything serious and  neither does Buchholz. The Red Sox  right-hander missed a start last month with soreness in his collarbone area