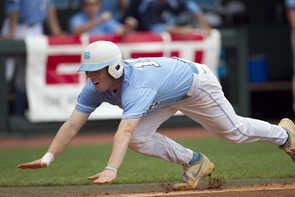 Freshman Skye Bolt delivered a game-winning base hit to right field to score Parks Jordan and the North Carolina Tar Heels beat South Carolina 6-5 in Game One of their Super Regional match-up  at Boshamer Stadium in Chapel Hill, North Carolina.

South Carolina tied the game at 5 all in the top of the eighth after an RBI double from Chase Vergason. Carolina closer Trent Thornton gave the Tar Heels a chance to win in the bottom of the inning with a perfect ninth.

South Carolina won the national championship in 2010 and 2011, then finished as the runner-up last season.

Thornton (10-1) picked up the win in relief allowing one run over three innings of work and Tyler Webb took the loss for South Carolina. The two teams will play again tomorrow in Game 2, with North Carolina needing only one win to advance to the College World Series in Omaha Nebraska.