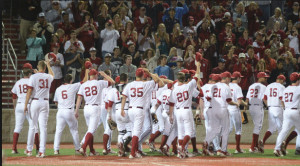 Florida State and Indiana matched up in Game One of their best-of-three Super Regional that had Indiana edging the Seminoles 10-9.

Florida State rallied in the ninth inning but came up a run short. Indiana pitcher Will Coursen-Carr was able to hold Florida State off in the final inning, getting two consecutive batters to fly out

Seminoles starter Luke Weaver pitched six innings allowing seven hits and five runs while striking out five.  It was the first time Weaver has given out more than three earned runs in a game since May 11.

Gage Smith (4-2) took the loss for FSU after giving up two runs on two pitches in a four-run seventh inning for the Hoosiers. Indiana would later add one run in the top of the eighth to mark just the third time all year that FSU allowed 10 runs in a game.