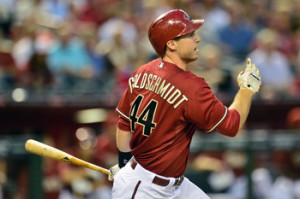 Paul Goldschmidt hit a three-run homer  with two outs in the bottom of the eighth inning off Jeremy Affeldt and the Arizona Diamondbacks rallied to beat the San Francisco Giants 3-1.

Starters Matt Cain and Patrick Corbin each allowed one run and Cain was in position for the win and Corbin seemed destined for his first loss of the season before Goldschmidt connected.

Gregor Blanco‘s two-out single brought Pablo Sandoval home from third in the seventh  to account for the Giants only run.

Goldschmidt  now has 15 home runs  with 57 RBI and is hitting .332.  Arizona leads the National League’s  West division by 2 1/2 games over the Rockies and now 3 1/2 games over San Francisco.