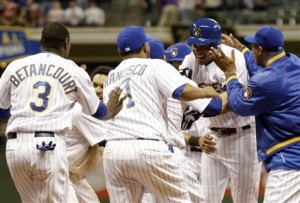 Aramis Ramirez was 0 for 4 in a game the Philadelphia Phillies jumped out to a 4-0 lead and hit a game winning single in the ninth to lead the Milwaukee Brewers to a 5-4 victory over the Phillies.

For Ramirez, it was his only hit of the night but a clutch performance with one out and runners in the corners against Phillies’ reliever, Jeremy Horst. Brewers’ reliever, Francisco Rodriguez, picked up his first win of the year and lowered his ERA to just 0.96 in 2013.

Jimmy Rollins got things started for Cliff Lee and the Phils in the opening frame, delivering an RBI single to make it 1-0. Delmon Young would single and Eric Kratz would hit a two run home run to make it 4-0 Philadelphia into the bottom of the fourth, when the Brewer’s bats would awaken.

A Yuniesky Betancourt single and a groundout from Brewer’s starter, Alfredo Figaro would cut the lead in half and Milwaukee would come all the way  back in the seventh inning on a two-run triple by Jean Segura.

With the win, the Brewers improve to 23-37 but remain two games behind the Chicago Cubs and in last place in the NL Central. For the Phillies, it was a no-decision for Cliff Lee who went seven innings and gave up three earned runs. Philadelphia remains a half game ahead of the Washington Nationals (who were postponed on Friday) and good for second place in the NL East. The Phillies fell to 31-31 but did not lose ground to the first place Atlanta Braves, who were defeated in 10 innings by the Los Angeles Dodgers on Friday night.