The New York Yankees have traditionally focused on high school players with high upside for their drafts, likely due in part to the lack of availability on the parent club. This year, all of that has shifted with numerous players set for free agency and staples such as: Alex Rodriguez, Derek Jeter and even someone like, Mark Teixeira, having future projections a lot fuzzier than they were a year ago.

The Yankees have always been aging, but now it appears to be catching up with them. While 2013 has been positive in that Brian Cashman has been able to weather the storm, he can’t possibly use bandaids forever to field a year in and year out contender, the bare minimum of expectations in the Bronx. It was with that understanding, the Yankees seemed to go into the draft last night, and they didn’t disappoint.

New York had three first round picks and chose one second rounder on the first day of the draft, selecting a combination of high upside, safety and fast turnaround.

Eric Jagielo: With the 26th overall pick, the Yankees took the third baseman out of Notre Dame. Jagielo is a safe bet at a position of need. The fact he’s a college guy (the first position player at the college level the Yankees have taken since bust, John-Ford Griffin in 2001) and a smart hitter who can adjust makes him an ideal first round pick for New York.

With Alex Rodriguez aging and his career in peril, the Yankees could use a solid third baseman of the future. Jagielo is a lefty with decent power (second in the Cape Cod league with 13 HR) who has a rocket arm at third, making him a potential corner outfield if his glove doesn’t hold across the diamond.

With David Adams struggling in the majors and the only legitimate prospect in the system at the “hot corner”, Jagielo not only can see an immediate opening at the major league level, but has the tools to climb through the system quickly, with a MLB projection of 2016 if he moves at a normal rate. Perhaps not coincidentally, 2016 is A-Rod’s merciful walk year and Adams’ first year of arbitration.

Jagielo hit .388 with 9 HR in 196 at bats his junior year. His main criticisms are whether or not his glove will let him stick at third base, where his bat would project the best, or if he will be moved to first (where his bat would still be acceptable) or into the corner outfield. Recently, scouts have been more relaxed with Jagielo’s defensive ability. 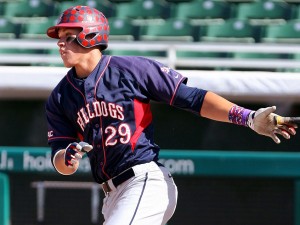 Aaron Judge: Easily the highest upside of the four picks and a logical risk-reward pick at 32nd overall with the Yankees also selecting with the 33rd overall pick. Judge is a mammoth, listed at 6’7″, 255 LBS as a center fielder. The Fresno State senior would tie Frank Howard for the tallest MLB out fielder ever if he reached the Show.

Though the power is evident (compared to Giancarlo Stanton in terms of raw power), Judge has had issues putting together his physical and hitting abilities on the field.

Likely to shift from center field to right field despite having a good amount of speed, Judge has hit just nine home runs as a career high in any of his three years of college, despite winning the college home run derby in 2012.

Still, his upside makes him the 24th best talent in the draft according to MLB.com, which makes this a value pick. With his size and lack of ability to incorporate his natural gift of power, there is doubt about Judge’s ability to ever  hit major league pitching and cut down on strikeouts enough to keep him from being a poor man’s Russell Branyon, but his bat projects as an average hitter with 30+ HR power.

The Yankees will need to work with him to refine his swing and plate discipline, so don’t expect a MLB appearance until 2017 at the earliest. Another logical selection by the Yankees, given that Judge has long-term huge potential but will need work, and the outfield has a surplus of talent in the upper tiers of the system. 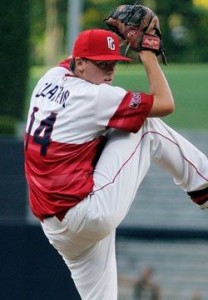 Ian Clarkin: The riskiest in terms of “signability” but nevertheless a lefty starting pitcher with some solid upside as the 33rd overall pick. Clarkin, a self-admitted Yankees’ hater until the moment he was drafted, is out of James Madison high school in San Diego and already committed to San Diego, so it’s not a guarantee he signs. However, with the Yankees selecting two college players with little alternative options, they may be able to grab Clarkin over slot to secure him with money saved in the first two rounds.

Clarkin is very developed for a high school arm, already showing the ability to throw a fastball, curveball and changeup with the former two considered “plus” pitches. Ranked the 18th best player in the draft, Clarkin was actually not who most experts predicted the Yankees would take in that spot, with those honors belonging to Robert Kaminsky (taken by the St. Louis Cardinals instead).

At just 18 years old, Clarkin would have a long way to go before being a MLB finished product, but he does project as a front-of-the-rotation arm, with an early projected arrival year of 2018, at 23-years-old. Clarkin has drawn comparisons to Clayton Kershaw at the same age though is unlikely to reach that level of upside and will likely require more refining and nurturing.

Gosuke Katoh: The final pick of the day and a second baseman from Rancho Bernardo High School, also in San Diego. New York took Katoh 66th overall, but he may be the safest bet to reach the majors.

Katoh is slated as a second baseman and committed to UCLA, though it’s predicted there is very little chance Katoh doesn’t sign with the Yankees. Considered “toolsy” and “handsy” as a player and a hitter, Katoh has smart baseball instincts and elite defense. He also features excellent speed, solid base-running and good bat control.

Coming from one of the elite baseball programs in the country, there is a lot of hope for Katoh, even though his main criticism is with his throwing arm, considered on the weaker side. As a result of his limited arm, Katoh is playing second base, but his ability to defend can project to multiple positions, with his bat made for middle infield.

It’s doubtful the Yankees made this pick with Robinson Cano‘s walk season in mind, and Angelo Gumbs is ranked as the Yankees’ 7th best prospect at the same position, so Katoh’s Major League path is limited at the moment. This is why New York probably felt safe taking Katoh straight out of high school since it is unlikely he has any clear path until his projected arrival year, likely 2018.