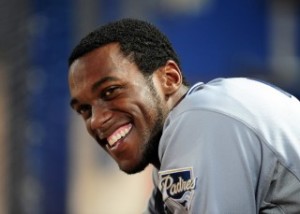 San Diego Padres center fielder Cameron Maybin will be reinstated today from the disabled list after missing the last 45 games due to a right wrist impingement.

Maybin was placed on the 15-day DL on April 18 after injuring his right wrist on a defensive play in a game against the Los Angeles Dodgers on Monday, April 15. Maybin has dealt with discomfort in his right wrist over the course of the past two seasons with the Padres.

Before being placed on the DL, Maybin was struggling in the initial days of the season. In 10 games this season, Maybin posted a paltry .091 batting average (3-for-33) and .167 OBP.

Two days prior to his injury, Maybin had been held out of the lineup for two straight games to work with Padres hitting coaches Phil Plantier and Alonzo Powell as means to fix his offensive struggles.

In his second season with the Padres in 2012, Maybin turned in a rather mediocre season in terms of offensive production, despite providing solid defense in center field. In 147 games last season, Maybin posted a .243 batting average (123-for-507) while stealing 26 bases (Maybin stole 40 bags in 2011) and striking out 110 times.

In Maybin’s absence, Alexi Amarista, Chris Denorfia, and Will Venable have manned center field; however, aside from Denorfia (who primarily plays right field), Amarista and Venable have not provided consistent production for the Padres.

The Padres sit five games below the .500 line with a 27-32 record, good enough for fourth place in the NL West standings. San Diego is in need of a permanent fixture in center field who will provide both consistent offensive and defensive production and whether Maybin is that guy is yet to be determined.