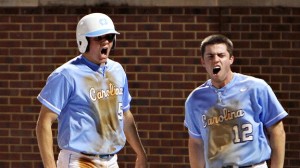 The North Carolina Tar Heels, after falling to Florida Atlantic 3-2 on Sunday evening, would stave off a hard charging Florida Atlantic team in dramatic fashion, advancing to Super Regional play in a 13 inning marathon that saw the Tar Heels pull off a 12-11 walkoff victory.

Following a 2-2 tie in the second inning, the Tar Heels would pull away with four unanswered runs, reaching a comfortable 6-2 lead in the seventh inning. North Carolina appeared to have righted the ship from last night’s woes until the top of the ninth inning when the Florida Atlantic offense came knocking on the door.

Owls right fielder Corey Keller would lead off the inning with a solo home run, however, it would be a grand slam by designated hitter Tyler Rocklein that would cement a six-run comeback for the Owls. Five of the six runs scored by the Owls would be charged to Tar Heels ace Kent Emanuel, who entered the game in a relief role in the eighth.

Faced with an 8-6 deficit, the Tar Heels would power back in the bottom of the ninth. Cody Stubbs and Michael Russell would both reach on a double and a single, respectively. With one out, Mike Zolk ripped a single to right field, scoring Stubbs and Russell and evening the game 8-8.

The game would reach extra innings, wherein both teams would quietly pass through the tenth and eleventh innings. However, the Owls would open up the game once again with a three-run homer by Levi Meyer in the top of the 12th inning, putting Florida Atlantic back up 11-8.

However, the Tar Heels would not give up, charging back in the bottom of the 12th with back-to-back bases loaded walks and an RBI single by Mike Zolk that would even the score at 11-11.

The marathon would come to a close in the bottom of the 13th, as Cody Stubbs would single to left, scoring Landon Lassiter and clinching the Chapel Hill Regional Championship for North Carolina.

North Carolina will advance to Super Regionals, hosting South Carolina at Boshamer Stadium. The Tar Heels will try to advance to the College World Series for the tenth time and their first since 2011, with the ultimate goal of bringing home the NCAA title for the first time in school history.