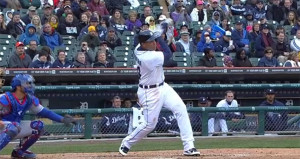 Miguel Cabrera is at it again this season, putting up masterful offensive numbers in a season that could very well result in a second straight Triple Crown, a feat that has never been accomplished in major league history.

The Detroit third baseman was superb in the month of May, batting .379 (44-for-116) with 12 home runs and 33 RBI in 28 games. Over the course of the month, Cabrera has held multiple double-digit hitting streaks, an 11 game streak that ended on May 13 and a 12 game streak that started the following day.

That May 13 game would be the only game in the month of May that Cabrera failed to reach base safely.

Many across the big leagues are cognizant of Cabrera’s offensive exploits this season, including the likes of his own manager, Jim Leyland.

Cabrera is currently batting .367 with 17 home runs and 65 RBI through 55 games this season, but the Tigers slugger doesn’t let any of his talents and hype get to his head.

“I try to keep focused on what we want,” Cabrera said. “I try to win games. I don’t get distracted about what people say. Go out there and play your game, try to play to win and that’s it. Don’t try to put extra pressure on yourself and don’t try to do anything else [other than what] you can do.”

A little over two months have passed and Cabrera is once again a frontrunner for Most Valuable Player, in that the term “valuable” can be deemed an understatement to the Detroit Tigers.