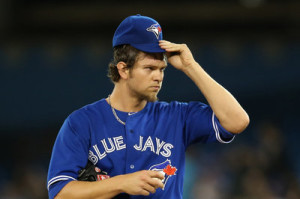 Josh Johnson will return from the disabled list and start for the Toronto Blue Jays on Tuesday night. Johnson has struggled during his time in the AL East, though has made just four starts thus far this season.

Johnson has battled injury issues throughout his young career, making at least 30 starts in just three seasons since his debut with the Marlins in 2005.

Johnson was the headliner of an offseason blockbuster, a trade which gutted most of the Marlins roster. Johnson, Mark Buehrle and Jose Reyes were the three key players in the deal and Miami would go on to move: John Buck, Heath Bell and earlier last season, Hanley Ramirez.

For the Blue Jays, it was a deal meant to catapult them over 20 games into first place with the Yankees getting a year older, the Red Sox recovering from a 93 loss season, the Orioles due to regress in close games and the Rays with an anemic offense, though it’s Toronto which finds itself the only team out of the current division race.

Toronto also acquired Melky Cabrera on a two year deal and traded for R.A. Dickey. Cabrera got off to a slow start, Dickey has struggled, Johnson and Reyes have both been injured and Buehrle has been hit hard for the most part, all leading to Blue Jay struggles.

Johnson was not particularly good in his rehab stints either, posting an 11 to 4 K/BB ratio and a 5.40 ERA in three rehab starts stretching out to 11.2 innings.

The Blue Jays will face off against the defending champion, San Francisco Giants and the 29-year-old, out since April 21st,  did not face any physical setbacks during his rehab stints.