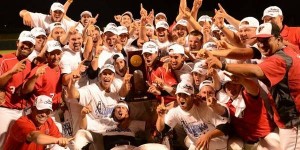 “It’s been unbelievable,” Keller said. “The opportunity to come to Tampa, it’s been a blessing.”

“Just so proud of this group,” Joe Urso said after capturing his third national title as Spartans coach. “They did everything we asked from them.

This was the first time since 2003 that the top-two ranked teams in DII college baseball had faced each other in the championship game.

Jake Shrader was named the tournament’s most outstanding player after hitting  .444 (8-for-18) with two home runs, seven RBIs and a .944 slugging percentage in five games.

Tampa fought back from the losers bracket after losing 4-2 Grand Valley State on Thursday,  then winning 10-1 on Friday to advance to the final.