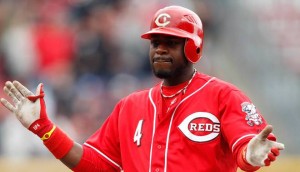 The Cincinnati Reds are hoping to avoid a DL sting with second baseman, Brandon Phillips. Phillips  is hitting .296/347 with 9HR and 45 RBI. The second baseman was struck by a pitch in the forearm but is only expected to miss three to four days per manager, Dusty Baker.

For Phillips, it’s his first obstacle during what has thus far been a terrific start personally. The second baseman has helped fuel the Reds to the second best record in both the NL central and Major League Baseball, trailing only the division rival St. Louis Cardinals by 2.5 games in the standings.

Presently, Phillips announced he is unable to play through this injury since he cannot even grip a bat, which has to raise at least some concern if a diagnosis of missing just a few days is entirely accurate.

Many might remember, Curtis Granderson, being hit not once but now twice this season and missing extended time due to both injuries. Granderson was most notably hit on the first day of Spring Training by Blue Jays’ starter, JA Happ, and broke his arm, missing all of Spring Training and the entire month of April.

Though nothing is broken for Phillips, it is entirely possible he misses at least a week from the injury, especially if the Reds are going to play it safe with one of their most productive hitters.