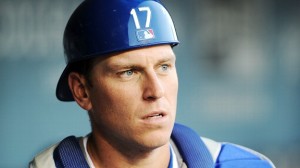 A.J. Ellis, the starting catcher for the Los Angeles Dodgers, will not be playing for at least two more weeks. Ellis joins a list of players recently sidelined with oblique strains and was placed on the DL retroactive to May 30th

Los Angeles waited almost through the entire weekend to see if Ellis would be able to play sooner, but ultimately decided to deactivate him instead.

Through 42 games, Ellis was one of the lone bright spots for a Dodgers team which had struggled with pitching and in especially in the lineup, hitting .262/.364 in 141 at bats.

For the last place Dodgers, it’s yet another injury in a season full of them and with a list of players underachieving.

Ellis will be replaced behind the dish by a combination of Ramon Hernandez and Tim Federowicz. As with most oblique injuries, the timetable is not immediately certain. Ellis is eligible to return by June 14th, but oblique injuries of all sorts can tend to linger and may cause the catcher to miss more time.

Everest Re Group Rating Increased to Buy at StockNews.com