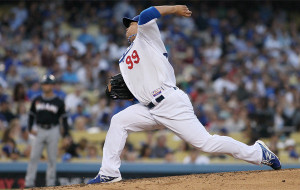 Hyun-Jin Ryu one of the few positive stories for the Los Angeles Dodgers this year has been scratched in his start against the Colorado Rockies with a bruised left foot. Matt Magill  has been called up from Triple-A Albuquerque to make the start in his place.

Ryu, 26, was hit in the foot by a comebacker in his last start on Tuesday  And the Dodgers are hopeful that review can avoid a stint on the DL.

A.J. Ellis  was placed on the 15 day disabled list earlier today to make  room on the roster for Magill.

Ryu  is having an outstanding first year in the major leagues with a 6-2 record and a 2.89 ERA.  the Dodgers have suffered through a myriad of injuries this season.

Outfielder Matt Kemp was placed on the disabled list last week and Carl Crawford had to leave last night’s game with a hamstring issue.

Currently the team is without Josh Beckett, Chad Billingsley,  Hanley Ramirez and Stephen Fife. Zack Greinke  missed time earlier this season with a broken collarbone. The Dodgers currently occupy last place in the National League West with a 23-31 record and are 7 1/2 games behind the Arizona Diamondbacks.