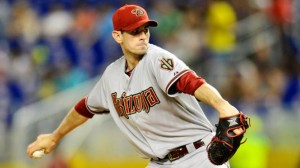 Brandon McCarthy had just started to find his stride in the Arizona Diamondbacks‘ rotation, but instead was placed on the DL on Sunday with right shoulder inflammation. The right hander had strung together three consecutive starts with a 0.38 ERA, including two wins and an 18 inning scoreless streak.

That run ended during his last start, when he lasted just 2.2 innings in Texas, rounding out his season numbers to date at 2-4 with a 5.00 ERA in 11 total starts.

A slow beginning to 2013 was expected for McCarthy, who was infamously hit with a line drive in the head towards the end of his 2012 season, spending time in the hospital recovering during what was almost a career-ending injury. Instead McCarthy will be sidelined for the fifth consecutive season with a shoulder injury.

The 29-year-old has missed as much as three months in a row with shoulder injuries in the past, but there is no immediate timetable for his return. The Diamondbacks have recalled Randall Delgado from its AAA Reno rotation to take McCarthy’s spot in the rotation and on the roster.

The Diamondbacks presently sit at the top of what has been an otherwise underachieving division. The Los Angeles Dodgers were winter winners, spending the most of any team but find themselves in last place with an array of injuries and underachieving players.

The defending champion, San Francisco Giants ran into a brutal May and sit just two games above .500 and the Colorado Rockies, one of the hottest teams in baseball in April, are tied with San Francisco for second place, 2.5 games behind the Diamondbacks.