Posted by Joshua Vadeboncoeur on May 29th, 2013 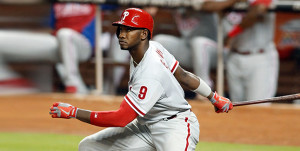 After struggling to find his groove in his first three seasons in the big leagues, Philadelphia Phillies outfielder Domonic Brown has tuned in this season and has quietly become one of the leading sluggers in the game.

On Wednesday evening, Brown led the Phillies in their 4-3 victory over the Boston Red Sox with two home runs, his third straight game with a homer and fourth in his last five games.

This past week, Brown was named NL Player of the Week for a week in which he batted .348 with two home runs and seven RBI, the first Philadelphia position player to receive the honor since Raul Ibanez in July 2011.

In the three games since receiving that honor, Brown has been even more productive. Brown has batted .400 with four home runs and five RBI, all coming against the AL East division leading Red Sox.

Brown says that an adjustment to his swing has made all the difference this season.

“I think I just had a longer swing, now that I’m looking back on it,” he said. “I did a lot to my swing to shorten it up, especially in those good hitter’s counts, just being able to be short and quick to the ball. Before, even in the minor leagues, I would get away with [a longer swing] because pitchers don’t have that much movement. Up here, you have to shorten your swing up.”

Philadelphia would hold off a ninth inning comeback by Boston and win the game 4-3, improving to a 26-27 record on the season. The Phillies have won two straight and six of their last ten games.