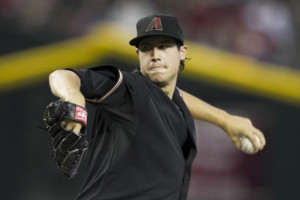 A former first-round (40th overall) draft pick out of Santa Monica High School in 2009 by the Los Angeles Angels, Skaggs has been considered one of the top pitching prospects in the country for the Arizona Diamondbacks system.

In nine starts this season for Reno, Skaggs has been less than impressive, posting a 4-5 record and 5.23 ERA in 51.2 innings of work. Despite his inconsistencies, Skaggs was given the call for Monday’s start after Ian Kennedy sustained a cut to his right index finger.

In his first big league start of the season, Skaggs was impressive. In six scoreless innings of work, Skaggs held the potent Rangers offense to just three hits, while striking out nine batters and walking three. The 5-3 victory would serve as Skaggs’ first career win.

Skaggs effectively utilized a diverse pitch arsenal, commanding his fastball with great location and making knees buckle with his sharp curveball. His off-speed offerings, that of his breaking ball and changeup, served as solid mix pitches, effectively changing velocity and commanding the count.

Although he will be optioned back to Reno with the return of  Kennedy this week, Skaggs certainly displayed his plus pitch arsenal to an Arizona club that will most likely give the young starter another call later this season.

With the victory, the Diamondbacks improved to a 30-22 record on the season, maintaining a 1.5 game lead over the San Francisco Giants in the NL West standings.