Taylor Guerrieri An Arm to be Reckoned With, Continues Domination in Minors

Posted by Joshua Vadeboncoeur on May 23rd, 2013 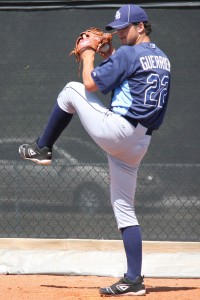 While the majority of analysts and scouts were infatuated with the likes of top pitching prep stars Archie Bradley and Dylan Bundy when the 2011 MLB Amateur draft rolled around, a big-armed prep pitcher from South Carolina would be quietly selected in the later half of the draft by the Tampa Bay Rays.

That pitcher is Taylor Guerrieri, star right-hander out of Spring Valley High School, who has dominated the Midwest League this season for Single-A Bowling Green.

Following his selection as the 24th overall pick the 2011 draft by the Rays, Guerrieri would make his professional debut for Short-Season A Hudson Valley in 2012 and has ascended to Class A baseball in 2013, anchoring the rotation at Bowling Green.

Guerrieri has an excellent pitcher’s body and frame (6-3, 195), lean yet strong which gives him the ability to possess a smooth, clean delivery with spotless arm action. His mechanics are so sound that his delivery appears as if he’s playing catch, all of which contribute to effective command and control of his pitch offerings. Guerrieri possesses excellent poise and commands a strong mound presence.

Guerrieri boasts a four-pitch arsenal consisting of a two-seam and four-seam baseball, curveball, and changeup, all of which he delivers from the same “three-quarter” slot delivery. Guerrieri’s two-seam fastball sits in the low-90s and is a serious plus pitch.

The pitch has an incredible amount of sinking action and downward movement, inducing a high number of ground balls. Guerrieri is also strong enough to use his two-seam as a cutter, which speaks volumes of the strength and versatility of this pitch.

His four-seam fastball varies from the low to mid-90s and has good natural movement and life, which explodes in the strike zone with tons of movement. Guerrieri is often times aggressive with this pitch and heaves it towards the plate with authority, which allows for electrifying movement.

While Guerrieri continues to develop his changeup, which has decent sinking action and needs further improvement in terms of pitch deception, Guerrieri’s “bread and butter” has been his curveball.

His curveball has been his out-pitch this season, buckling the knees of Midwest League batters with tight spin and devastating downward movement. Guerrieri is able to paint this pitch across the plate with hard action and has utilized it as his primary strikeout pitch, wherein he has struck out 73 batters in 85.0 innings over the past two seasons. 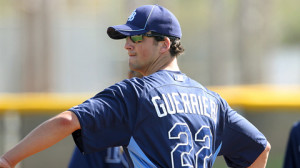 Guerrieri possesses good command and projects to be plus-level with further development. What sets apart Guerrieri from the majority of his prospect peers is his tremendous control, due in part to an easy delivery and plus pitch offerings.

Guerrieri can throw strikes all day and can effectively locate each of his pitches to all parts of the plate, which has translated into very low walk rates. In 85.0 innings of professional baseball, Guerrieri has given up only 12 walks, an incredibly impressive statistic.

Guerrieri’s pure stuff has been overwhelming for Class-A level batters this season. In seven starts this season for Single-A Bowling Green, Guerrieri has posted a 3-1 record and a 1.64 ERA with a 28/7 strikeout to walk ratio in 33.0 innings of work.

In his most recent start on Monday, May 20, Guerrieri worked six scoreless innings and surrendered just one hit, while striking out three batters with one walk. Guerrieri was dominant, scorching his plus two-seam fastball en route to an 11-2 groundball to flyout ratio. Guerrieri would garner his third victory of the season, securing an 8-0 victory for the Bowling Green Hot Rods over the West Michigan Whitecaps.

Although Guerrieri is projected to remain in the Tampa Bay farm system for the rest of the season (and for the majority of next season) due to further development and professional experience, the amount of pure talent that this pitching prospect has displayed this season is nothing short of astonishing.

Such a mature, poised, and intelligent pitcher will become an asset to the front end of the Rays rotation in the future, a future that is becoming brighter and sooner with each passing dominant start by this star prospect.

Guerrieri has quietly ascended the Rays farm system and continues to remain a relatively unfamiliar name in the world of top prospects. If he continues to progress and impress with at this level of talent, Guerrieri will become a familiar name that analysts and fans will admire, and offenses will come to despise.