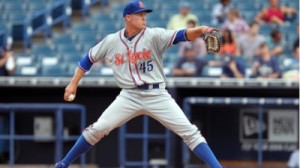 The past three MLB Amateur Drafts have produced great pitching talent, talent that has produced for MLB clubs throughout the minors and into the majors, such as with the early bloomers Matt Harvey and Chris Sale who have pitched brilliantly for their respective clubs.

Noah Syndergaard supplemental first-round draft pick in 2010 for the Toronto Blue Jays, and acquired from Toronto in the R.A. Dickey trade by the New York Mets pitched effectively for High Class A St. Lucie on May 16 against Brevard County, working 6.2 innings while giving up two runs with ten strikeouts and no walks allowed.

With this start, Syndergaard has continued his torrid month of May, working 19.2 innings and sporting a 22/3 strikeout to walk ratio.

Syndergaard, following a solid 2012 season with Low Class A Lansing where he posted an 8-5 record with a 122/31 strikeout to walk ratio in 103.2 innings, has been ranked amongst the top pitching prospects in the minor leagues. A tall, sturdy frame allows Syndergaard to throw downhill with a plus mid-90s fastball that has decent movement.

His pitching arsenal not only includes a powerful heater, but also off-speed offerings such as a changeup and curveball that he throws hard and effectively. Syndergaard’s sound mechanics, pitch offerings, and ability to throw strikes will allow him to become a frontend starter for the Mets within the next couple seasons.