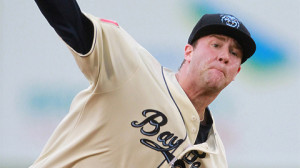 Seventh overall pick in the 2011 draft for the Arizona Diamondbacks, Archie Bradley was dominant in his start for Double-A Mobile on May 13 in a 3-2 victory over Jacksonville. Bradley worked 6 innings, giving up no runs on 2 hits with 9 strikeouts, adding continued success to a blistering month of May.

Bradley delivered another strong outing  leading Mobile to a 4-1 win over Pensacola in Southern league action. In his fourth Southern League start, Bradley  limited the Wahoos to one run on five hits and two walks in six innings.

In 19 innings this season for the BayBears, Bradley has given up two runs on 12 hits and eight walks and struck, with an ERA of .90

Bradley, following a workhorse 2012 season with Low Class A South Bend where he posted a 12-6 record with a 152/84 strikeout to walk ration in 136.0 innings, has been a top pitching prospect since his professional debut with Rookie Class Missoula in 2011. Bradley boasts a mid-90s fastball with tremendous sink that allows him to generate groundball outs and a high strikeout rate.

Aside from a plus heater, Bradley utilizes an off-speed arsenal that includes a changeup with good movement and late fade and a sharp curveball that is still developing. Bradley has the athletic build and stamina to be a workhorse and the tools to become a top of the rotation fixture, which is exactly what Arizona has been grooming him to become.