Joba Chamberlain Should Be Traded Out of Need, Nothing More 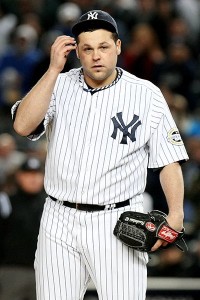 Much has been written recently about the melodramatic confrontation between the overrated, “punk” reliever who never quite reached his potential and perhaps the greatest player any reliever can ever aspire to become.

Of course, that’s just a narrative and Mariano Rivera and Joba Chamberlain bickering over who was being rude is akin to asking your co-worker to turn his music down when you’re on the phone or for finally speaking up when someone you work alongside heats up fish in the microwave for the fourth time.

Bullpens are supposed to be family. They all have their job to each other for one common goal. They’re supposed to play the triangle in the bullpen during a playoff game, not yell at each other over the volume of their voices.

Still, it happens. Arguments happen and sometimes that’s all it is.

So did Joba punch his ticket out of the Bronx because he spoke up to Rivera, arguably the greatest closer of all-time and a top two Yankee of the past 50 years? If he did, it shouldn’t be because of his attitude.

It should be because the Yankees are unlikely to resign him after his “walk year” and they face a major roster crunch in the next few days and weeks.

In a season where very little has been set in stone and a lot of ad-libbing and on-the-fly performance has left the Yankees with the best record in the AL, perhaps the most roster decisions will be coming just around the corner, a player adjustment unlikely to include Chamberlain in pinstripes when all is said and done.

It’s about a need

In an effort to supplement injuries to Eduardo Nunez and Kevin Youkilis, the Yankees obtained Chris Nelson and Alberto Gonzalez. New York didn’t offer more than a player to be named later to acquire either one, so pretty naturally both may be gone once Nunez and Youkilis return. Nunez is due back in the next week and Youkilis has just begun on-field drills and may not be much longer.

Jayson Nix has emerged as an on base machine of late, and can provide insurance as a backup all over the diamond. Of course, the Yankees will have a roster spot to keep one of these players and it should be a third baseman since Youkilis has chronic back problems. However, it’s still unlikely to be either of those names with Ronnier Mustelier getting healthy and David Adams likely to be called up on Wednesday when he is first eligible. Nelson will be first gone and Gonzalez in the next week when Nunez is back.

The outfield already has its players on the roster. Curtis Granderson returned to the lineup Tuesday night and has created a legitimate four-man outfield. Ben Francisco would appear to be the odd man out once Kevin Youkilis returns (or maybe sooner), especially with Thomas Neal and Brennan Boesch stored away in the minors. New York is likely to use Vernon Wells against lefties and playing him in left field, Brett Gardner as the everyday center fielder and Granderson and Ichiro Suzuki may be more of a utility role, platooning between left and right field and spelling Gardner when necessary.

With Travis Hafner battling shoulder issues, one of the four may get a hand at DH once in a while, especially once someone like Mustelier is on the roster and can play the outfield in a pinch.

The rotation is pretty self explanatory, too

CC Sabathia, Andy Pettitte and Hiroki Kuroda are locked in. Phil Hughes has safely emerged as a solid fourth starter and is pitching in a walk year, likely to be replaced by the Yankees’ sudden deep stable of mid to back-end arms in the farm system. Currently, David Phelps is exceeding expectations as the fifth starter and deserves to stay there all season, making Ivan Nova expendable, particularly with the presence of Vidal Nuno and the return of Michael Pineda.

Brett Marshall and a stretched out, Adam Warren, also provide starter options, as well as Chien-Ming Wang, who has until May 31st before his next opt out clause.

If the Yankees were wise, they would keep Nova in the minors once healthy and try to package him and Chamberlain to an NL team for something looking ahead to 2014. One thing is for certain. New York is slowly proving to itself Hughes and Chamberlain can both walk in contract years and the Yankees can save money in the back of the rotation.

Bullpen will be fine

Of course, to be OK with trading Chamberlain, one would have to evaluate the Yankees’ bullpen. Perhaps the one expected source of strength out of spring training, the New York bullpen has not disappointed. Mariano Rivera is perfect in save opportunities and New York leads the league in saves overall.

Dave Robertson and Boone Logan have strived in late-inning situations and the Yankees have turned to a remarkable amount of successful middle relievers.

Warren, like Phelps last year, has demonstrated he can keep his team in the game for multiple innings. Shawn Kelly and Preston Claiborne have been lights out since Chamberlain’s injury (and once Kelly was utilized correctly) and the Yankees have high prospect, Mark Montgomery, performing well and waiting in the minors. Nuno, who pitched five shutout innings in the second half of the double-header against the Indians on Monday, has also shown he can be summoned in relief.

Cesar Cabral, who has a chance to win a spot as a second lefty out of Spring Training before suffering major injury last year, is beginning a rehab assignment and along with Cody Eppley, provides additional depth in the minors.

In other words, right now: Marshall, Gonzalez, Nelson, Claiborne or Kelly and Francisco are all on the roster and unlikely to make it another month. This after Joseph, Nuno and Boesch already lost their spots in the past few days.

Before the All-Star Break we may see: Romine, Overbay and Chamberlain depart as well, the latter likely the only one in a trade.

The Yankees have a mountain of depth for the non-core players and have proven as much through the first quarter of the season.

They should be trusting they can replace a lot of the roster with cost-controlled players, even when the big boppers come back healthy.

That project can start with Chamberlain, who’s attitude hasn’t impacted New York in any negative sort of way, but quite simply doesn’t fit into the present or the future.