Mariano Rivera is a Reminder of the Greatness Behind Jackie Robinson 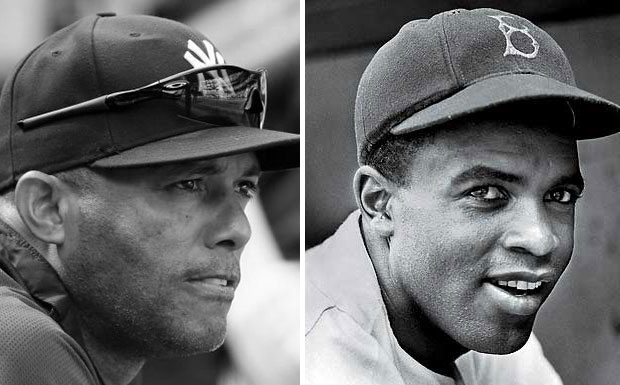 The number “42” has always been a weird little subtlety of the game of baseball for a Yankees’ fan. In late 1993, I started following the Yankees. The first season I can remember in any detail from start to finish was the great (and first) wildcard race of 1995. Fresh off a strike, the Major Leagues had a new realignment to divisions and allowed the first ever team to not come in first place still reach the playoffs. Of course,  it had to be the New York Yankees in the American League.

Coincidentally, back then, I had yet to experience the “charmed” life of being a Yankees’ fan. My team made an incredible push with mediocre talent to the postseason, took a 2-0 series lead on the hated Seattle Mariners only to see an odd 2-3 playoff format backfire, the Yankees to fall apart in the Kingdome and I watched as Joey Cora cheated his way into the ALCS, effectively ending Don Mattingly‘s career and sending me into my first sports shock. The Braves would eventually beat the Indians and that was that.

The season of 1995 was important for one other major reason; it was the first major league introduction to Mariano Rivera.

Back then, he was a spot-starter who didn’t have a great arsenal. By 1996, he was the best setup man in the game (and maybe threw up the best setup man season of all time). By 1997, he was a closer and now by 2013, he will finish his career as the greatest closer to ever live. Mariano Rivera is my timeline of baseball. The number “42”, in the scope of my fandom, will always be Mariano Rivera.

But as I head into my late 20’s I can see the bigger power behind the number. I remember in fourth grade having to take a test called the GEPA in the state of New Jersey. I was woefully unprepared. We had to tell a story of something we were passionate about and present it in front of the class.

A few weeks earlier I had a classic “eight-year-old talks to an old man” conversation. I was with my Dad and we talked to an elderly man who loved baseball. Even back then I had a passion for stories and loved hearing them from others. This man told me about how his favorite player he ever saw was Jackie Robinson. He grew up in Brooklyn and remembered Ebbets Field like I remembered my first trip to Yankee Stadium earlier that year.

It was my first introduction into the player and the person, well before I understood any of the political ramifications. He told me how Jackie played the game the right way and specifically how during a game he attended, Jackie intentionally ran in front of a hot ground ball knowing he would be out. He did this because it would have been a game-ending double play if not for being called out by being hit in the base line. He had those kinds of instincts. The next hitter delivered a game-tying single and the Dodgers went on to win the game.

The elderly man was a white Yankees’ fan.

The story of a mythical player at the time stuck with me and I told that story for my GEPA presentation.

In 2004 I saw Fenway Park for the first time. My sister attended college at Emerson and I was visiting. We went on the Fenway tour.

By now, I was 17 and had done my own research about Jackie Robinson. Having grown up in New Jersey and being born in New York, most of the accounts I heard were about how good of a ball player he was in the terms of being a “Yankees’ killer”. How the “one” time the Dodgers beat the Yankees it was Jackie’s fault, and of course, all about his steal of home plate.

In my family he was out, but historically he was safe.

Even as die-hard Yankees fans, we all appreciated the ball player.

During the tour it was quickly unveiled I was a Yankees’ fan. The tour guide didn’t let me live it down for the entire hour. Right around the time we entered the “High Roller’s Club”, the tour guide presented a trivia question.

“Out there are the retired Red Sox numbers. We’re not like the Yankees, we don’t retire just anyone’s number. You will see the five we have retired and one extra one. The number “42” is retired among all Major League baseball teams. Up until this past season there were two players remaining who still were able to wear Jackie Robinson’s number, do you know who they are?”

Half the crowd answered with “Mo Vaughn“, the Red Sox favorite of the 90’s who had retired in 2003. The tour guide stared at me and asked for the other player. I stared back, completely frozen from an hour of being heckled by Red Sox fans.

“The other, is Yankees’ closer Mariano Rivera”, he said.

But that day sent a powerful message to myself. Rivera wore the same number as Robinson, not the other way around.

Nearly a decade later, I was as unsure the most dominant player I’ve ever seen would still be playing as I was of the fact the Red Sox would break the “curse” of incompetence later that season on the tour in spring of 2004. Naturally, the next time I visited my sister happened to coincide with the Red Sox victory parade, one I attended for historical purposes just like the Fenway tour.

Baseball is nothing without its history.

But as has been written all day long and every year around the Big Apple, there is no other player in this generation who wears the number “42” better than Mariano Rivera. I have spent almost 20 years watching it serve as mostly some of my happiest memories. When “42” is on the field, the Yankees win. Period.

In 2013, the Yankees, the team who shares a city with Robinson’s historics itself, will have a farewell tour for the best closer of all-time. While this is taking place as a side show, the best player in the lineup, Robinson Cano, will try to lead New York back to the playoffs. Cano has such a connection to Robinson, he was, in fact, named after him. On Tuesday, as has been the case a few times, everyone will wear Mariano Rivera’s number during the Yankees’ game since they are off for April 15th.

Mariano Rivera will be wearing Jackie Robinson’s number as he does every game. On Tuesday, everyone else will join him.

The day itself serves a few reminders for a Yankees’ fan. One of that both Cano and Rivera would not have existed if not for Jackie Robinson. The sport itself would not be the same. The history would be tainted and without the history, the game may not have lasted. Another is that on April 15th,  everyone will wear a number served by greatness. In the Bronx, the greatness represents two different athletes.

The final is that next year the only day a New Yorker or anyone will be able to witness the power and meaning behind the number “42” will be Jackie Robinson Day.

There will be no more Mariano.

Robinson and Rivera will both be gone from the sport on the field and yet one day a year, the number “42” and all of its meaning for everyone will live on for all of the sport’s history.

And that’s the point.

Hikma Pharmaceuticals PLC Given Consensus Recommendation of “Buy” by Analysts