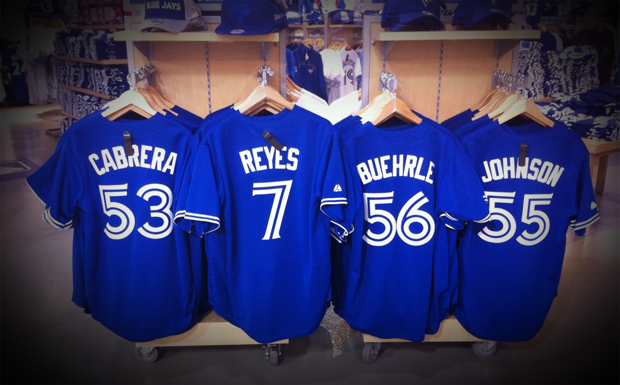 For the first time since 1993, when Joe Carter‘s dramatic home run off Phillies closer Mitch Williams clinched a World Series title, Toronto Blue Jays fans feel confident about their team’s chances to play deep into October. Their confidence is justified, at least based on how the team looks on paper entering spring training.

General manager Alex Anthopolous made a series of headline-grabbing deals this offseason. The main transaction involved bringing in shortstop Jose Reyes, starting pitchers Josh Johnson and Mark Buehrle, and second baseman Emilio Bonifacio from Miami for a package that included top prospects like outfielder Jake Marisnick and pitcher Justin Nicolino along with shortstops Yunel Escobar and Adeiny Hechevarria among others.

To further bolster the rotation, Anthopolous gambled the future with an eye on the present by sending a package of names (including top catching prospect Travis d’Arnaud and right-handed pitching prospect Noah Syndergaard) to the New York Mets for NL Cy Young Award winner and knuckleballer R.A. Dickey along with catcher Josh Thole.

Injuries have taken their toll on the Blue Jays rotation in recent seasons. This year, holdovers Brandon Morrow and Ricky Romero join Johnson, Buehrle and Dickey in what could be one of the game’s strongest rotations from top to bottom.

Sluggers Brett Lawrie and Edwin Encarnacion are slated to man third base and first base respectively while Maicer Izturis will compete with Bonifacio at second base and Reyes will play shortstop and hit leadoff.

J.P. Arencibia, who appeared on his way out of Toronto with d’Arnaud in the system, projects as the starter behind the plate while Adam Lind will serve as the DH.

Casey Janssen (closer) and Sergio Santos will be counted on in the late innings in a bullpen that will have spirited competition for spots in spring training.

Toronto is the media darling of the American League because of its myriad of moves, but as the Red Sox discovered in 2011 and the Marlins learned last year, championships are not won based on pre-season predictions.

As long as the five starters stay healthy – and key bats like Reyes, Bautista, Lawrie and Encarnacion stay off the DL – the Blue Jays should contend for a division title. 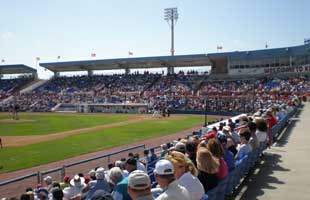 There is nothing spectacular about Florida Auto Exchange Stadium, which is the spring training home of the Toronto Blue Jays.

The ballpark has  5,509 individual seats and has a press box level with air-conditioned sky boxes, three picnic areas, two air-conditioned rooms, a scoreboard with electronic message display, two half-fields (both with artificial turf), batting tunnels and and the main ballpark itself.

It’s early evening on St. Joseph Sound, and a crowd that features a mix of locals and tourists gathers at the pool deck area of Beso Del Sol Resort’s Marker 8 Tiki Bar.

As the sun gracefully bows from the horizon of Honeymoon and Caladesi islands in the distance, the conch horn sounds and guests raise their glasses to toast another sunset over the Gulf of Mexico.

The complimentary “Sunset Shot” is a tradition at Beso Del Sol, a condominium resort which overlooks St. Joseph Sound in Dunedin. 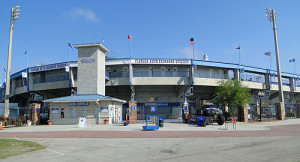 Global Connections Inc., led by CEO Tom Lyons, bought the property at 1420 Bayshore Blvd. in 2008 and has incorporated extensive renovations into the resort, which offers posh studio, one-bedroom and two-bedroom units with waterfront and garden views. The studios are equipped with kitchenettes while the one-bedroom and two-bedroom units have kitchens. Beso Del Sol also has a lavish penthouse suite that can house as many as 10 guests.

At Beso Del Sol guests can park their cars for the duration of their visit if they prefer. The resort has two swimming pools, a hot tub and a fitness center. At the Marker 8 Tiki Bar, where the nightly Sunset Shot is held, there is live entertainment from Friday through Sunday in the spring, summer and fall.

Providing a waterfront view from the fourth floor, the Marker 8 Restaurant serves breakfast and lunch seven days a week from 8 a.m. to 2 p.m. Food is served on the pool deck from noon to 8 p.m. Marker 8’s menu includes favorites like Belgian waffles, pancakes, bacon and eggs and a variety of omelettes.

For added recreation, Beso Del Sol offers free bicycles. The resort is located across the street from the Pinellas Trail, a paved multi-use trail on a former railway. Guests can pedal a short distance along the Pinellas Trail to nearby downtown Dunedin.

A quaint waterfront town, Dunedin is one of the most popular towns in the Grapefruit League, blossoming with eclectic art, one-of-a-kind boutiques, innovative dining and an active nightlife scene. Just minutes away from its welcoming, walkable and pet-friendly downtown, you’ll find some of the best beaches in the country at Honeymoon Island and Caladesi Island, the latter of which can only be reached by boat.

Beso Del Sol guests who want to explore the area in a leisurely fashion can board the Jolley Trolley, which makes stops at Beso Del Sol Friday through Sunday. The trolley connects Dunedin with Clearwater Beach, Palm Harbor and Tarpon Springs.

Beso Del Sol is home to Blue Crush Water Sports, which is operated by Capt. Calvin Horn and gives guests the opportunity to rent kayaks and stand-up paddle boards, hop ferry rides to and from Caladesi Island and Clearwater Beach, and embark on eco-dolphin and marine life tours. 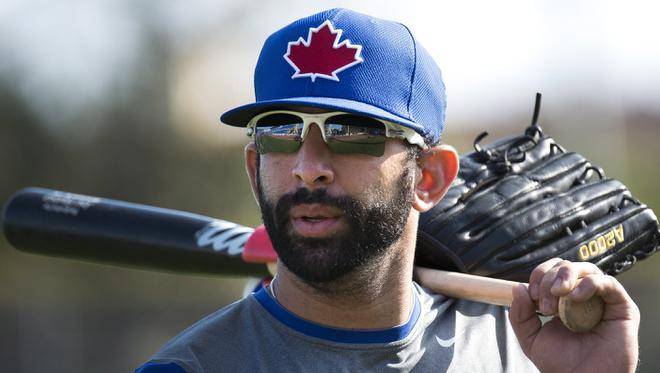