Michael Bourn: Good Deal, But Not For Cleveland Indians 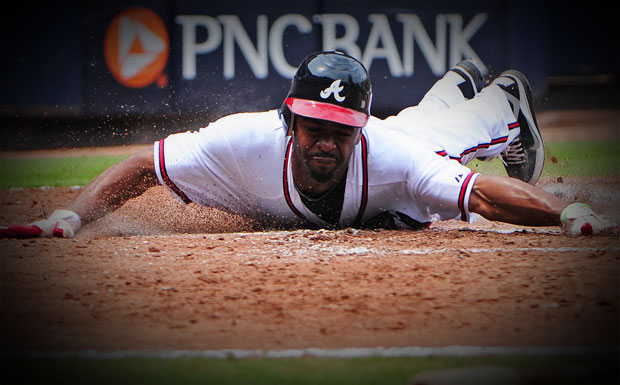 The Cleveland Indians made a surprise splash on the free-agent market, inking speedy outfielder Michael Bourn to a four-year, $48MM deal (with a $12MM vesting option). While most organizations had been turned off by Bourn’s rejected-qualifying offer status, since the Indians’ first round pick is protected, the team only has to surrender a competitive-balance pick. Yet, even though the Indians retained their first-round pick, and added a top-shelf lead-off man and defender for arguably a fair price, it was still a curious move for the should-be re-building franchise.

Over the past four seasons, Bourn has been worth 19.0 WAR–or 4.75 WAR per season. Per Bill Petti, one can assume a 0.5 WAR decline through age 32, and a 0.7 WAR decline through age 34 (the age he’ll be once the full contract expires after 2017). If that’s the case, the 30 year-old might be worth 14.55 WAR throughout his full five-year contract. And with inflation, he could be worth around $82MM during that period of time too.

Yet, even though the Indians capitalized on an unfortunate market for Bourn, the money used on the outfielder could have been far better spent elsewhere.

The first big move the organization pulled off this off-season was a successful one, dealing Shin-Soo Choo and Tony Sipp in a three-team deal, netting top pitching prospect Trevor Bauer, center fielder Drew Stubbs, and relievers Matt Albers and Bryan Shaw. The Indians quickly replaced Choo’s offensive by signing Mark Reynolds to a one-year, $6MM deal, and Nick Swisher, to a four-year, $56MM deal. But that’s where the off-season took a turn for the worse.

A day after signing Swisher, the Indians added Brett Myers on a one-year, $7MM deal, and then rounded out their rotation by inking Daisuke Matsuzaka to a one-year, $1.5MM (with incentives up to $4MM) deal. Considering the Indians’ rotation was such a subject of much contention going into the off-season, it was strange to see them patch it up with low-ceiling options like Myers (85 ERA+ as a starter in ’11), and Matsuzaka (53 ERA+ in ’12). Since their rotation already featured mediocre hurlers like Ubaldo Jimenez (72 ERA+ in ’12), Zach McAllister (92 ERA+ in ’12), and Justin Masterson (79 ERA+ in ’12), the newcomers only pose further question marks going into 2013.

Yet, before signing Bourn, the excuse to not add a top-tier starting pitcher seemed to be just: there is little reason for a rebuilding team to sign two high-salaried free-agents in one off-season. But when the Indians dropped what will likely be $60MM on yet another hitter in Bourn–and their third center fielder to boot (on top of Michael Brantley and Stubbs)–it clearly indicated a delusional mindset: the Indians could best the Tigers and White Sox for the Central Division.

Why else would the Indians hand Michael Bourn that much money–even if he’s worth it?

Instead of over-building an outfield and putting bandaids on a gaping rotation, the Indians should have taken the Michael Bourn, Brett Myers, and Daisuke Matsuzaka money, and spent it on flippable starting pitching assets. For a combined $17.25MM–which is $3.25MM less than what they spent on the above mentioned players–the Indians could have signed Scott Baker (signed one-year, $5.5MM with the Cubs), Shaun Marcum (signed one-year, $4MM with the Mets), and Brandon McCarthy (signed a two-year, $15.5MM with the Diamondbacks).

The trio of Baker, Marcum, and McCarthy would not only have solved the Indians pitching woes, but also, could have provided the Indians with lucrative mid-season trade chips.

Unless General Manager Chris Antonetti has a few tricks up his sleeve, the self-escalated expectations of the 2013 Cleveland Indians might quickly become the sport’s newest train-wreck.