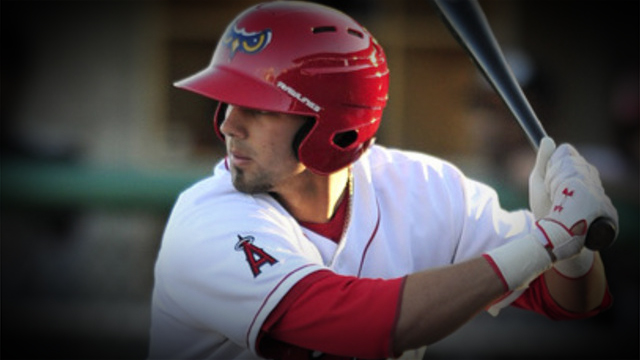 Albert Pujols was the big news signing in Anaheim last off-season, but it was phenom Mike Trout who garnered the most attention in 2012 for the Los Angeles Angels. The 21-year-old outfielder was named American League Rookie of the Year and finished second in AL Most Valuable Player voting to Detroit Tigers third baseman Miguel Cabrera.

This off-season, the Angels made another free agent splash, inking Josh Hamilton to a handsome contract. Is there an Angels prospect who could steal the headlines in 2013?

Though prospects who make such a dramatic impact like Trout rarely arrive on the scene, the Angels do have some promising names in their system, including third baseman Kaleb Cowart, first baseman C.J. Cron, second baseman Taylor Lindsey, left-handed pitcher Nick Maronde and outfielder Kole Calhoun, but only Maronde and Calhoun are likely to see time in the majors this season among the team’s top prospects.

Here are the Angels’ top 10 prospect entering the 2013 campaign:

1) A first round selection out of high school in 2010, 20-year-old Kaleb Cowart is a switch-hitting third baseman who projects as a run producer at the Major League level, as his 16 home runs and 103 RBI between low and advanced Single-A last season indicate. He generates power from both sides of the plate, and since he was a respected pitching prospect in high school, he has a strong arm ideal for third base.

2) C.J. Cron was a first round pick (17th overall) out of the University of Utah in 2011, and his plate discipline, pitch recognition and physical strength help him hit for average and power. The 23-year-old right-handed hitter batted .293 with 27 home runs and 123 RBI at Inland Empire in the hitting-friendly California League last season, but Cron has the tools to generate those type of numbers in any league.

3) Nick Maronde, a third round pick in 2011 out of the University of Florida, was so impressive at three minor league stops last season with the Angels that they promoted him to the majors, where the 23-year-old left-hander posted a 1.50 ERA (and a 1.50 WHIP) in 12 relief appearances. He typically has strong command of his plus fast ball and slider, and since he has those power offerings, his future could be as a late-inning reliever or as a starter.

4) A supplemental first rounder in 2010, Taylor Lindsey is a left-handed hitting second baseman who was named MVP of the Pioneer League in 2011 and followed that with a respectable .289 average with nine home runs, 58 RBI and six triples at Inland Empire last year. He is an effective defensive second baseman as well.

5) Like Trout, Randal Grichuk was selected in the first round by the Angels in 2009. His development in the minors interrupted by injuries, the 21-year-old right-handed hitting outfielder still has upside. He put together a complete 2012 campaign at Inland Empire that saw him hit .298 with a .823 OPS, 18 home runs, 71 RBI, nine triples and 16 stolen bases.

6) Drafted in the third round out of Florida Atlantic last summer, R.J. Alvarez is a power reliever who could follow Maronde’s lead and reach the majors in his second pro season. His fast ball ranges from 95 to 97, and Alvarez also possesses a slider and change-up.

7) An eighth round pick out of Arizona State in 2010, the left-handed hitting Kole Calhoun made his Major League debut last year, hitting .174 in 23 at-bats after batting .298 with 14 home runs, 73 RBI and 12 stolen bases at Triple-A Salt Lake City. A contact hitter who knows how to draw walks and get on base, Calhoun is hard to strike out and projects as a corner outfielder.

9) A.J. Schugel was an unheralded 25th round draft pick out of Central Arizona College in 2010, but the Angels were familiar with him since his father, Jeff Schugel, is a member of the Angels scouting department. The 23-year-old Schugel was a two-way player when he was drafted, but he has exclusively pitched as a pro. The right-hander has three plus pitches and recorded a 2.89 ERA and a 1.22 WHIP in 27 starts at the Double-A level last season.

10) A fourth round pick out of Ole Miss last summer, Alex Yarbrough is a switch-hitting second baseman who is average on defense but is a contact hitter who rarely strikes out. He hit .287 with just 20 strikeouts in 257 plate appearances in the low Single-A Midwest League last year in his pro debut.