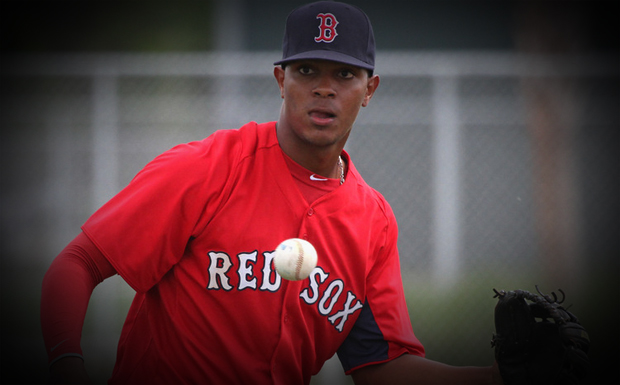 Boasting a well-stocked farm system rich with potential impact players who are slated to open the 2013 season at Double-A or Triple-A, the Boston Red Sox have shaped their current off-season strategy to ensure that many of these prospects will get the chance to shine at Fenway Park over the next few years.

Though the club entered the off-season with enviable payroll flexibility after last summer’s trade with the Los Angeles Dodgers shed the cumbersome contracts of Adrian Gonzalez, Carl Crawford and Josh Beckett, it has opted to offer short-term deals to free agents. One reason for this approach is to not block the paths of top prospects when they are deemed Major League ready.

Leading the list of top prospects for the Red Sox is 20-year-old Xander Bogaerts, an Aruba native who projects as a middle of the order bat at the Major League level. Bogaerts is No. 7 on the Baseball News Source Top 10 Prospects List heading into the 2013 campaign.

The Red Sox also have some intriguing starting pitching prospects, including two right-handers (Rubby De La Rosa and Allen Webster) they acquired in the aforementioned trade with the Dodgers.

Here are the top 10 prospects in the Red Sox farm system entering 2013:

Currently a defensively proficient shortstop, there is debate whether Bogaerts will remain at the position for the long term or transition to third base or left field as his body grows bigger and stronger. Regardless, the right-handed hitter has a high offensive ceiling. At 19, he opened the 2012 season in the advanced Single-A Carolina League and batted .302 with a .883 OPS to accompany 15 home runs and 64 RBI in 435 plate appearances. As one of the youngest players in the Eastern League when he received a promotion to Double-A Portland, Bogaerts hit .326 with a .948 OPS in 97 plate appearances. If he is moved to left field, Bogaerts could form a prominent outfield with fellow top prospects Jackie Bradley and Bryce Brentz.

A first round pick (19th overall) out of the University of Connecticut in 2011, Barnes projects as a No. 2 or No. 3 starter at the Major League level and features a fast ball that ranges from 93-98 along with a an above-average curve ball and a developing change-up. In his first year of professional baseball last season, he logged a 2.86 ERA, a 1.05 WHIP and 133 strikeouts in 119.2 innings between Single-A Greenville and advanced Single-A Salem (Va.).

Likely, if they do not trade him beforehand, the Red Sox will extend Jacoby Ellsbury a qualifying offer next offseason, watch him decline it and get draft pick compensation when he signs elsewhere as a free agent. Boston can afford to let Ellsbury depart because of Bradley, who is considered even better than the veteran as a center fielder and can hit for average. A supplemental first rounder in 2011 out of the University of South Carolina, the 22-year-old Bradley has a .311 average and a .896 OPS in two minor league seasons.

De La Rosa has drawn comparisons to another former Dodgers right-hander who was traded from their organization – Pedro Martinez. The 23-year-old Dominican Republic native possesses an explosive fast ball that sits between 94 to 97 and can reach 98 to 100. He also has a plus change-up and an inconsistent but promising slider. Since De La Rosa underwent Tommy John surgery in 2011 and missed much of the 2012 season, his innings will be closely monitored this year.

Among the strikeout and ERA leaders in the Southern League before he was traded from the Dodgers to the Red Sox last year, Webster has a mid-90s sinkers that often induces grounders when it doesn’t get swings and misses. He is working on enhancing a curve ball and change-up. Webster could be a middle of the rotation starter or a late-inning reliever. How he commands his three pitches will determine what role he fills long term.

Third base is a position of depth and strength in the Red Sox organization with Will Middlebrooks at the Major League level, the possibility that Bogaerts could be moved to the hot corner and the presence of the 21-year-old Cecchini. He has improved his defense at third base, and the left-handed hitter batted .305 with a .827 OPS and 51 stolen bases at Single-A Greenville last season.

Boston’s 2011 Co-Minor League Offensive Player of the Year, Brentz continued his development last season by hitting .296 with a .833 OPS, 17 home runs and 76 RBI at Double-A Portland. He has a strong and accurate arm, which makes him ideal for right field at Fenway Park.

A first round pick out of high school in 2011, Swihart is still developing his abilities behind the plate, and the switch-hitter projects to hit for average and power. The agile Swihart has a strong arm, and the club believes his long-term future can remain at catcher, but he has the athleticism to move to another position.

A supplemental first rounder out of high school in 2011, the 20-year-old Owens is a power left-hander who struggled at times in his pro debut season. He finished with a 4.87 ERA and a 1.45 WHIP, but he also struck out 130 batters in 101.2 innings while allowing 101 hits.He is working on commanding his fast ball and curve ball, and improving his change-up. Owens has top of the rotation potential.

Jose Iglesias, the 22-year-old Cuban shortstop sensation, is a defensive whiz in the Omar Vizquel mold but it remains to be seen if he will hit enough to warrant a spot in the starting lineup. If the Red Sox move on from Iglesias and move Bogaerts to another position, the shortstop of the near future could be Marrero, who was Boston’s first round pick (24th overall) out of Arizona State University last summer. A plus defensive player with a strong arm, the 22-year-old Marrero is a line drive gap hitter who has the potential to be a steady everyday Major League shortstop.