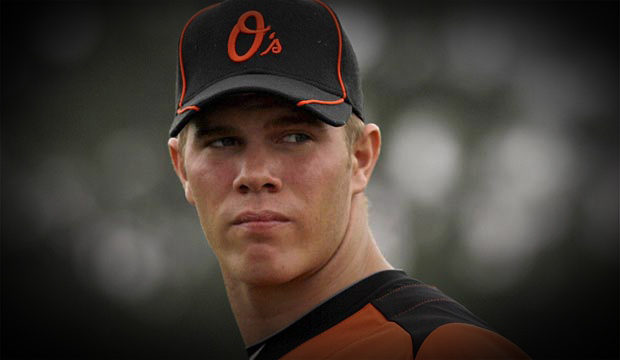 With Manny Machado being promoted to the major leagues last season Dylan Bundy establishes himself as the number one prospect in the Orioles system. After Bundy right-hander Kevin Gausman and infielder Jon Schoop should be next in line for an opportunity at contributing at the major league level over the next two years, but Bundy clearly is the top prospect in the Orioles system.

At No. 2 on the Baseball News Source Top 10 Prospects List entering the 2013 campaign, right-handed starting pitching phenom Bundy had a memorable debut season last year. Selected fourth overall by the Orioles out of Owasso High School in Oklahoma, Bundy recorded a 2.08 ERA and a 0.92 WHIP over two Single-A stops and Double-A Bowie before tossing 1.2 scoreless frames in his Major League debut with Baltimore in the midst of a pennant race. The 20-year-old Bundy has a chance to earn a spot in the Orioles rotation in 2013.

Here are Baltimore’s Top 10 prospects heading into the 2013 season:

1) Dylan Bundy features four plus pitches – a fast ball, a slider, a curve ball and a change-up – Bundy has top of the rotation potential. Anything less would be a disappointment for the Orioles. Along with outstanding stuff, he features exceptional command and the mound presence of a seasoned veteran.

2) Kevin Gausman first college pitcher taken in the 2012 draft – fourth overall out of LSU – Gausman signed and logged five starts, including three in the advanced Single-A Carolina League. He features a plus fast ball and change-up, and he is working on a reliable and effective breaking ball. He has a chance to grow into a frontline starter, perhaps giving the Orioles a one-two punch along with Bundy.

3) Jonathan Schoop is a versatile middle infielder out of Curacao, the 21-year-old Schoop has seen a lot of time at second base with the presence of uber prospect Manny Machado in the Orioles farm system. Machado could end up at the hot corner in Baltimore, which would open shortstop for Schoop. Or, the Orioles could keep Machado at shortstop and team him with Schoop at second base to give the club a savvy double play combination. Schoop belted 14 home runs at Double-A Bowie last year so he has power.

4) Nick Delmonico was a  sixth round pick out of high school in 2011, the 20-year-old Delmonico is the son of longtime college baseball coach Rod Delmonico. He has an advanced baseball IQ and a patient hitting approach. An adequate defensive third baseman, Delmonico has plus power potential in his left-handed bat. He belted 11 home runs and 54 RBI last year at Single-A Delmarva in the South Atlantic League in his professional debut.

5) Eduardo Rodriguez signed as an international free agent out of Venezuela,l the 19-year-old Rodriguez is regarded as the top left-handed pitcher in the Orioles system. He features a low 90s fast ball that moves and a solid curve ball and change-up.  He posted a 3.70 ERA and a 1.24 WHIP while limiting hitters to a .251 average in 22 starts at Single-A Delmarva last season.

6) Xavier Avery was  second round pick out of high school in 2008, the 23-year-old Avery has the speed to develop into a leadoff hitter at the Major League level. Whether he becomes a starting center fielder or a fourth outfielder depends on his bat. In 458 plate appearances at Triple-A Norfolk last year, Avery stole 22 bases, ripped eight home runs and tallied five triples, but he hit just .236. In his Major League debut, he saw 107 plate appearances, batting .223 with six stolen bases.

7)For L.J. Hoes hitting is not an issue, a third round pick out of high school in 2008. The 22-year-old Hoes has a .283 average over five minor league seasons, including a .300 mark in 317 at-bats last year at Triple-A Norfolk. He also stole 20 bases and slapped seven triples between Double-A Bowie and Norfolk in 2012. Like Avery, it is uncertain whether Hoes will hit enough to be a starting outfielder or an extra outfielder, but he is more advanced at the plate than Avery.

8) Brandon Kline was a second round pick out of the University of Virginia in 2012, Kline is from Frederick, Md. and he hails from a family of Orioles fans. The right-hander projects as a middle of the rotation starter or even a closer. His power arm could get him to Baltimore faster if he pitches out of the bullpen. Kline appeared in four games at short-season Aberdeen after signing last summer.

9) Mike Wright is  sinker-slider pitcher who was a third round pick out of East Carolina University in 2011, the 23-year-old Wright split time between Single-A and Double A last season. He is developing a change-up, and if progress on that pitch continues, Wright could remain a starter. His Major League debut could arrive sooner out of the bullpen, though.

10) Adrian Marin was a  third round pick out of high school last summer, the 18-year-old Marin signed and saw time in the Gulf Coast League (where he hit .287 in 178 at-bats) and even performed admirably in a brief stint at Delmarva in the South Atlantic League (.286 in 21 at-bats). Marin is a strong defensive shortstop who possesses speed. He needs to improve his patience at the plate, but he has the potential to develop into a reliable top of the order bat.