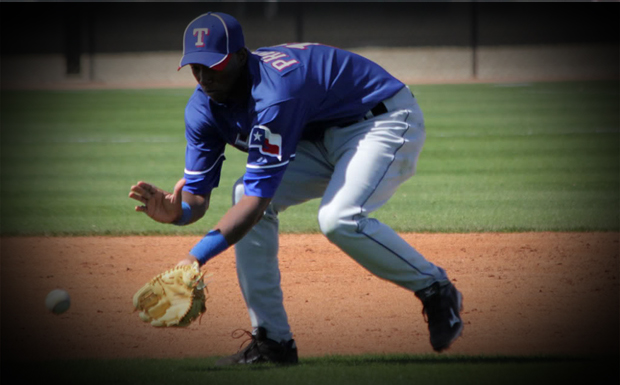 In 2012, Major League Baseball experienced a memorable year for young phenoms. Mike Trout, who is 21, was named American League Rookie of the Year while Bryce Harper, who turned 20 in October after the season ended, received National League Rookie of the Year recognition. Late in the season, in the midst of a pennant race, the Baltimore Orioles summoned Manny Machado (who celebrated his 20th birthday in July) from Double-A Bowie and he tallied 191 at-bats, losing his rookie status.

In September, the Texas Rangers called up 19-year-old uber prospect Jurickson Profar from Double-A Frisco. Profar, who is now widely recognized as the top prospect in baseball, was 3-for-17 (.176) and cracked his first Major League home run. Since Profar retained his rookie status heading into the approaching season, he is still considered a prospect and heads the BNS 2013 Top 10 Major League Prospects list. The list features a myriad of names who could follow Trout and Harper by making an impact in the majors in their early 20s.

Profar – who is a superb defensive shortstop, a fast and smart base runner, and can hit for extra bases (as his 14 home runs, 26 doubles and seven triples at Frisco last year indicate) – has a chance to make the Rangers’ opening day roster if the team deals incumbent shortstop Elvis Andrus, or either trades second baseman Ian Kinsler or moves him to another position.

The Curacao native does not turn 20 until February 20, and chances are the Rangers will be forced to find a spot for him on their 25-man roster at some point in 2013.

Incorporating a mix of four plus pitches, Bundy was the fourth overall pick out in the 2011 draft. He rapidly ascended the Orioles farm system in his first season of professional baseball, logging a 2.08 ERA and a 0.91 WHIP with 119 strikeouts in 103.2 innings between two Single-A stops and three starts at Double-A Bowie.

With Baltimore in the midst of their first pennant race in several seasons, the club called up Bundy to pitch out of the bullpen briefly in September. He appeared in two games, recording 1.2 scoreless innings and allowing one hit and one walk.

The right-hander pitched the entire 2012 campaign at 19 (he did not turn 20 until November) and has a chance to break into Baltimore’s rotation, though it is more likely he begins 2013 in Triple-A and finds his way to Baltimore at some point during the regular season.

Named the 2012 Minor League Player of the Year by Baseball America, Myers is considered one of the best (if not the best) hitting prospects in baseball, which is why the offensive-starved Rays acquired him in a package of prospects from Kansas City for James Shields and Wade Davis earlier this offseason.

Between Double-A Northwest Arkansas and Triple-A Omaha, the right-handed hitter belted 39 home runs with 107 RBI and a slash line of .314/.387/.687/.987. Surprisingly, the Royals did not call him up in September, so he has yet to make his Major League debut.

Likely, Tampa Bay will station Myers at Triple-A Durham to open the 2013 campaign and delay his eligibility for free agency. There is no doubt, though, that the 22-year-old Myers will join the Rays in the first half of the season.

The heir apparent to Carlos Beltran in right field for the Cardinals, Taveras had a strong showing in the Dominican Winter League and has demonstrated improved power and plate discipline.

The first overall pick in the 2011 draft, Cole soared through the Pirates farm system in 2012, starting at advanced Single-A Bradenton (where he made 13 starts), moving onto Double-A Altoona (where he recorded 12 starts) and making one start at Triple-A Indianapolis. Overall, he logged a 2.80 ERA, a 1.20 WHIP, a .230 opponent’s batting average and 136 strikeouts in 132 innings.

The 6-foot-4, 220-pound right-hander has three plus pitches (fast ball, curve ball and change-up) and projects as a top of the rotation starter in the majors. Cole joins Jameson Taillon, a 21-year-old right-hander, as highly regarded Pirates pitching prospects who could anchor the club’s rotation for several seasons.

Stocked with an abundance of solid young pitchers (including Wade Miley, Trevor Cahill and Patrick Corbin in the majors and Archie Bradley in the minors), the Diamondbacks felt comfortable parting with top starting pitching prospect Trevor Bauer (who was dealt this offseason to Cleveland in the three-team trade that shipped Shin-Soo Choo to Cincinnati) because of Skaggs.

The 21-year-old left-hander, who recorded a 5.83 ERA in six starts with Arizona last season, posted a 2.87 ERA with a 1.22 WHIP, a .246 opponent’s batting average in 22 starts between Double-A Mobile and Triple-A Reno. He will vie for a spot in the club’s deep and talented rotation in spring training.

The Aruba native is currently at shortstop, but as his body continues to grow bigger and stronger, he could be moved to third base or left field. Bogaerts projects as a middle of the order bat in the majors, and his Major League debut could arrive as early as this September, but likely he will split the season between Portland and Triple-A Pawtucket.

The top catching prospect in baseball, d’Arnaud has now been traded twice for aces. First, he was shipped from Philadelphia to Toronto in the Roy Halladay deal, and this offseason he was packaged to the New York Mets for R.A. Dickey.

The 23-year-old d’Arnaud boasts the rare combination of a catcher who is exceptional behind the plate (with his arm, agility and athleticism) and a run producer at the plate. In 2012, he hit .279/.380/.595/.975 with 16 home runs and 52 RBI in 279 at-bats at Triple-A Las Vegas. His season was shortened by a knee injury, but he is expected to be fully recovered in time for spring training.

Detractors point to Bauer’s unorthodox delivery and conditioning methods, but the soon-to-be 22-year-old right-hander has thrived in the minors. Earlier in the offseason, Arizona traded him to Cleveland in the three-way transaction that sent Shin-Soo Choo to the Cincinnati Reds.

In 2012, Bauer was 12-2 with a 2.42 ERA and 157 strikeouts in 130.1 innings between Double-A Mobile and Triple-A Reno. He was roughed up in four Major League starts, logging a 6.06 ERA that was not helped by 13 walks in 16.1 innings. Yet he has five pitches, including a fast ball that can hit 97, and he will likely break spring training in the Indians rotation.

Moved to the outfield because his defense as shortstop was subpar, the 22-year-old Hamilton set a minor league record in 2012 with 155 stolen bases between Single-A and Double-A. He also batted .311 with 14 triples.

The Reds hope Hamilton emerges as the leadoff hitter they need for the long term, and though he will open the 2013 season at Double-A or Triple-A, he has a chance to reach the majors this year if he shows he can provide strong defense in the outfield.

Leslie’s and The Competition Head to Head Survey

Leslie’s and The Competition Head to Head Survey

DigitalBits Trading Down 20.2% Over Last 7 Days