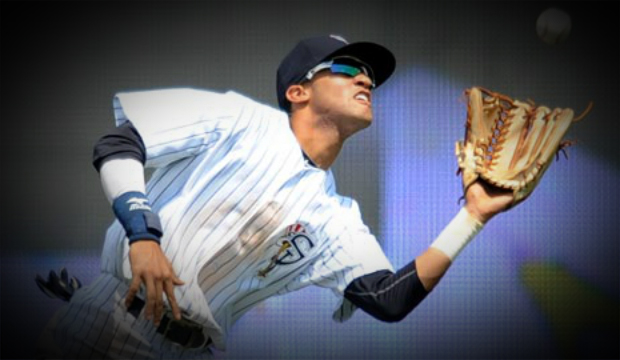 The Yankees have one of the more controversial farm systems in baseball. By no means is it elite, but some go as far as to call it barren, which is also patently false.Though the Yankees likely do not have a top prospect in the top 30 of Major League Baseball, there are quite a few players who can have successful major league careers, and in that sense, New York has plenty of depth, mostly finding its way towards AA this season. With numerous extra picks this year and likely next year, the Yankees have an opportunity to have a very strong farm system by 2014, particularly if some of its current prospects can stay healthy.

1) Mason Williams, Think Austin Jackson, but yet to play in AA. Williams was a fourth round pick in 2010 and posted a .298/.348/.474 line before injuring his non-throwing shoulder and cutting his season short. In the process, the center fielder was still able to advance from low A to high A and will be on the fast track to AA with his season likely starting in A Tampa. The Yankees’ top prospect offers excellent speed with some power and could be a September call-up by 2014 if he stays healthy.

2) Slade Heathcott, ever wonder why it’s a much bigger issue for the Yankees not to resign Robinson Cano than Curtis Granderson? Besides the obvious that Cano is simply better, the Yankees are extremely deep in the outfield, particularly the middle of it. With Brett Gardner as the perfect stopgap, New York may not have to worry about paying big for an outfield anytime soon. Slade Heathcott is just 22 years old (Mason Williams is just 21), but was the Yankees’ top pick in 2009. Heathcott, like most of the other big time Yankees’ prospects, has had issues staying on the field and has already undergone multiple shoulder surgeries, hurting his stock in the process. However, when healthy, Heathcott has just as high of a ceiling as anybody. The outfielder posted a .307 batting average in high A Tampa last season and has remained healthy in the Arizona Fall League. Because of his advanced hitting abilities, look for this top prospect to start in AA Trenton with a chance to see time in the majors at some point in 2014 if he continues hitting and staying healthy.

3) Gary Sanchez, like Jesus Montero before him, has two things going for him. The first is he is considered the Yankees’ catcher of the future, and the second is he has been a hyped prospect since he was 16 years old. Sanchez, now having just turned 20, has a better shot at sticking at the catcher position since his defense is superior to Montero’s. Sanchez used low and high A levels to post a .290/.344/.485 season at the plate last year and may make the leap to AA very early in 2013. Look for a Major League debut sometime in 2015, which seems to be the golden year for the Yankees to have control of its finances just in time for numerous cost-efficient high-end prospects to be ready for the big leagues.

4) Tyler Austin is another outfielder with a lot of tools on the Baseball diamond. Austin was a 13th round pick and is still just 21 years old, but between low A all the way to AA, the right fielder produced a .322/.400/.559 line and destroyed everything in his path. Personally, if not for being such a late pick and having low expectations when he joined professional baseball, I would tab Austin as the top prospect in the system. Clearly, with Nick Swisher gone and Ichiro Suzuki signed for two years, the Yankees feel Austin should be Major League ready by 2014, and if he continues to rake, he will force his way into a callup as early as next season.

5) Jose Campos is telling  because the Yankees top four prospects are all position players. Once considered the opposite, the Yankees’ system has truly started developing elite catchers and out fielders. With Manny Banuelos and Dellin Betances hurt and underachieving, Campos is now the prized gem of pitching in the Yankees’ system. Probably forgotten about, Campos was the “other” piece in a trade widely known as Michael Pineda for Jesus Montero. At 20 years old, Campos may be the one to have the best career out of everyone, except, of course, he too, had a lost season in 2012. Campos pitched in just five games before an elbow injury, and it’s hard to predict when he would be MLB ready. He’s talented enough to get there in a couple of years, but he may not stay healthy enough to make the jump quickly.

6) Brett Marshall is the most Major League ready Yankees’ prospect, and as a starter could prove to be very useful as depth if Ivan Nova struggles or Andy Pettitte gets injured. Last season, we saw David Phelps make the leap from a casual top 10 Yankees’ prospect to a valuable reliever and spot-starter. Phelps has a spot in the bullpen locked up and will be competing for the fifth spot in the rotation while Marshall represents that same depth along with lesser prospect, Adam Warren, for 2013. Marshall was a sixth round pick in 2008, and at 22 years old, posted a 3.52 ERA with 120K in AA Trenton. Marshall will start the season in AAA and is very likely to see Major League action next season either as a starter or reliever. The righty features a sinker ball to accompany a high ground ball rate, and what is considered the “best” changeup in the minor league system.

7) Angelo Gumbs is one of the prospects who could one day replace Robinson Cano if he goes unsigned is a very short one. David Adams is one name who is not considered a top 10 prospect who might be able to do it, but Angelo Gumbs is probably the front-runner at this point. Gumbs was a second round pick in 2010 and appears to be the best prospect from that draft for New York. At 20 years old, Gumbs  hit .272/.320 and stole 26 bases for high A Tampa in 2012. Gumbs didn’t learn second base until he joined the Yankees’ system and he was drafted out of high school, so not only won’t he be ready by 2013, but he may not be ready until 2015 0r 2016 even with improving offense and defense every season so far.

8) Manny Banuelos is perhaps the best example of the Yankees’ farm system in 2012. The left-handed starter cracked the AAA Scranton rotation as a 21 year old with an elite fastball, changeup and curveball. Lingering elbow issues eventually caused both erratic control and then a lost 2012 as well as 2013 after he underwent Tommy John surgery. Banuelos had made six starts before his injury and will not return to the mound until 2014, when he will still be just 23 years old. If he recovers nicely, Banuelos may be in the majors by 2014, but it’s realistic with recovery time and rustiness, he will be backed up to 2015, late 2014 at the earliest.

9) Ty Hensley was the first pick for New York in 2012 and has already cracked the top 10 list. Standing 6’6″, the big righty features a big curveball to compliment a mid 90’s fastball at just 19 years old. Having made just five appearances in rookie ball, Hensley got himself off to a good start , allowing eight hits in 12 innings, striking out 14 and yielding hitters to a .172 BAA. Hensley is unlikely to get past low A in 2013, so it shouldn’t be expected for him to be in the majors for at least another 3-5 years.

10) Rafael De Paula is by far the biggest wildcard of the group, but cracks the top 10 based on potential and raw talent. Due to Visa issues, the 21 year old has still not escaped the Dominican League (he was signed as an international Free Agent), so he’s likely to stick around A Ball when he finally does come over in 2013. In the Dominican, for what it’s worth, De Paula threw 62 innings and struck out 85 hitters, yielding just 35 hits. Turning 22 next year and just entering A ball makes De Paula an X Factor. If he adjusts well, he could go as far as AA by the end of the year. If he struggles, who knows how long he lingers? It’s a name to keep on the back-burner as one of those arms who can turn into something special, but it’s too risky to set any expectations except to say he will not be making an impact next season.