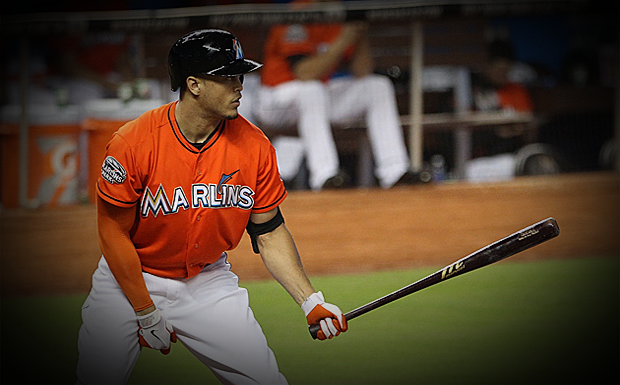 Marlins will listen to offers, but will they make a deal?

It would be silly for the Miami Marlins to trade Giancarlo Stanton.

And with just 2.118 years of service, Stanton and his growing talent are under team control for the next four years (or close to it).

Yet, despite all this–and just being paid about 2% of his true value–the Marlins are willing to listen to trade offers on Stanton.

There haven’t been any particular teams linked to Stanton yet, but below are five that match-up, from a prospect perspective, with the Marlins.

The Orioles arguably need pitching more than they do additional offense, but then again, how often do players like Giancarlo Stanton come on the trade market?

It’s unlikely the surprisingly-competitive Orioles would dangle Manny Machado, who looks to be the team’s opening day third baseman, but that doesn’t mean all is lost.

Baltimore would need to include either Dylan Bundy or Kevin Gausman, who are the team’s top two pitching prospects.

In addition to snagging one of the Orioles top two pitching prospects, the Marlins should also demand a second tier pitching prospect: and either Tyler Wilson or Eduardo Rodriguez would fit the bill.

Since the Marlins already have a slew of good left-handed pitching prospects like Justin Nicolino, Andrew Heaney, and Adam Conley, they might just go with the safer (but still good) Tyler Wilson.

The Marlins system–both on the Major and Minor League levels–are weak in the middle-infield.

Without Manny Machado in a deal, the Marlins will have to make due with either Jonathan Schoop or Adrian Marin from the Orioles.

As a deal sweetener, the Orioles could include one of Brian Matusz or Jake Arrieta.

On the other end of the spectrum, there’s Jake Arrieta–he’s just so misunderstood! The 26 year-old posted a 6.20 ERA, 1.36 WHIP, and 3.11 K/BB in 114.6 IP last seasoon, in what was one of the most split surface and peripheral season a starting pitcher could have.

These two unfortunate statistics led to an inordinate volume of baserunners, and perhaps accounted for his cavernous 6.20 ERA vs. 3.65 xFIP disparity.

If the Marlins are smart, they’ll also notice Arrieta’s across the board improvements in 2012.

Arrieta could immediately be inserted into the Marlins rotation, and if he pitches closer to his xFIP, he could either be a nice long-term option or trade chip for the Marlins.

Most Yankees fans have a knee-jerk reaction of tabbing Dellin Betances or Manny Banuelos as their top prospects. But it couldn’t be further from the truth.

The Yankees actually have one of the deepest systems from a pitching and future starting outfield perspective–so any deal involving Stanton would net the Marlins some very viable future stars.

The 21 year-old right-handed hitter will probably start the season at Double-A in 2013, but could see a quick promotion to Triple-A if he picks up where he left off in 2012.

Like Austin, Mason Williams appears to be a difference-making outfielder.

Assuming the Yankees would part with both of Austin and Williams, the Marlins should look to add one of either Corey Black or Mark Montgomery.

Also, according to John Sickels, Black touched 100 MPH on the gun. There’s little not to like about Black.

Assuming the Yankees extend Robinson Cano, they’ll have little use for Corban Joseph. Joseph is a 24 year-old, left-handed hitting second baseman, who can flat-out rake.

Between Double-A and Triple-A last season, the former-fourth rounder swatted a combined .276/.375/.465 line with 15 HR, 62 RBI, and 59 R. Joseph could probably start on a team like the Marlins (over Solano), but another half-season in Triple-A wouldn’t be out of the question too.

The Rangers, arguably, match up best with the Marlins for a Stanton swap.

With both Jurickson Profar and Mike Olt, a shortstop and third baseman, respectively, a trade centered around those two stud prospects would best address the Marlins system’s greatest needs.

He is also considered an excellent defender–so essentially, he has all the goods a team could want from a shortstop.

Mike Olt has seemingly been dangled for every big name, available Major Leaguer this off-season, which has, ironically, sort of hurt his value a bit.

That said, Olt still appears to be the real thing. The 24 year-old third baseman, like Profar, is Major League ready.

In the event the Rangers refuse to include Profar in any deal–which has so far been the case–the Marlins could look to snag either Rougned Odor or Luis Sardinas.

Profar has certainly been the center of attention among Rangers’ middle-infield prospects, but both Odor and Sardinas potentially have fine Major League careers ahead of them too.

Odor is a 18 year-old infielder (mostly second base) who spent all of 2012 in Single-A.

The left-handed hitter posted a decent line for a middle-infielder, hitting a .259/.313/.400 line in 471 PA’s. His 10 HR and 19 SB, as well as his stellar defense (.975 Fld% at second base) are exciting individual achievements, but he needs to develop better plate and on-base skills before truly becoming a blue-chip prospect.

Luis Sardinas has the opposite “problem” of Odor.

Heck, if Didi Gregorius can fetch Trevor Bauer, Sardinas–if he continues his current pace–should be the better shortstop option.

Again in the non-Jurickson scenario, and in addition to either Odor or Sardinas, the Marlins could also ask for outfielder Leonys Martin. The 24 year-old Cuban not only projects to be a plus defender in center field, but can also hit the tar out of the ball.

What’s a prospect package without a pitcher? The Marlins could target one of Cody Buckel or Justin Grimm, with the former being the more enticing of the two. Buckel, who is just 20, showed flashes of brilliance in 2012.

Prospect gurus like John Sickels like Buckel since he performed so well in such a hitter-heavy league (Texas League).

Also, Grimm got the call in June by the Rangers, though he didn’t pitcher particularly well (9.00 ERA,  1.78 WHIP, 4.33 K/BB in 14 IP). The Marlins might prefer Buckel merely based on age, but Grimm looks to be a solid mid-rotation option.

Unlike the Orioles, Yankees, or Rangers, it would be truly surprising to see the Cleveland Indians land Stanton. That’s not because they don’t need a player like Stanton, but rather, they’re technically re-building.

That said, isn’t Stanton the type of special player a franchise should arguably build around?

Whether or not you agree, the Indians might have a good package to offer the Marlins, without hurting the future depth of the franchise.

Bauer was shockingly included in the three-team blockbuster that sent Shin-Soo Choo to the Reds from the Indians–but only once the Diamondbacks agreed to swap defense-first shortstop prospect, Didi Gregorius for their own top prospect, Trevor Bauer.

The 21 year-old was so advanced, that he even made four starts (though only one of them was good) for the Diamondbacks towards the end of the season.

Even though the Diamondbacks sold low on the stud pitching prospect, that doesn’t mean Bauer couldn’t headline a trade to land a talent like Stanton.

Assuming the Indians retain Asdrubal Cabrera, he and Jason Kipnis will be the team’s infield for years to come–thus making Francisco Lindor, Dorssys Paulino, and Jose Ramirez expendable.

Paulino too is a fine shortstop prospect, but with 25 errors in just 46 games (.882 Fld%), he isn’t considered the glovesman Lindor is.

John Sickels more or less compared Ramirez to Jose Altuve (if he continues to hit at this rate).

Last on the list is reliever prospect, Cody Allen. The 24 year-old righty started the season in Advanced-A, and was promoted all the way up to the Indians Major League roster by late-June. The impressive acceleration was due to absolutely dominating at every level of the Minors.

If Allen finds his command, it’s hard not to like a three-pitch reliever–and potential closer–who throws a consistent 95 MPH fastball.

Last but not least is the Chicago Cubs. Theo Epstein is sort of half-rebuilding with his new play toy, but given his big splash roots, one has to think he’d love to make a deal for Stanton.

The Cubs are lucky enough to have a franchise shortstop in Starlin Castro, who they recently extended with a seven year, $60 million contract.

Given this contract, the Cubbies have little use for stud prospect Javier Baez.

He still has some kinks to work out, but Baez has potential to be an all-around offensive/defensive machine (for some franchise).

Assuming the Cubs don’t want to surrender their recently signed Cuban defector, Jorge Soler, the Marlins would have to settle for Albert Almora.

Luckily, Almora would be a heck of a compromise.

Almora needs a full-season in the Minor Leagues for experts to truly react, but the center fielder needs to walk more than he did (2.5% BB%) to be a Major Leaguer.

Now that first baseman Anthony Rizzo appears to have a definite home (was traded twice in the past two years), the 23 year-old can focus on performing, and maybe even buy a house.

The 20 year-old Vogelbach enjoyed one of the most impressive Minor League seasons out there.

Between Rookie-Ball and Single-A (Short-Season), the left-handed hitter sported a .322/.410/.641 line with 17 HR, 62 RBI, and 39 R. With his OPS at 1.051, you have to be excited about this guy’s future as a hitter–and considering the Marlins just have Twitter-focused Logan Morrison starting at first base, you’d have to think they’d covet Vogelbach.