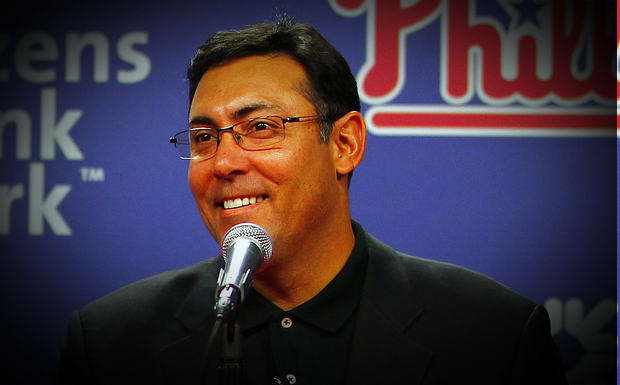 The Philadelphia Phillies had a forgettable 2012 season, but Phillies fans seldom forget. Changes had to be made

There were some obvious holes in the Phillies’ roster after last season.

The most glaring of which were at center, third, and set-up pitching.

Antonio Bastardo couldn’t hack it during the eighth inning.

General Manager Ruben Amaro Jr. has, hopefully, filled those holes, made some good moves, and made some that might be good.

Let take a look and provide some analysis.

Right before the end of the winter meetings, the Phils finalized a trade with the Minnesota Twins that would send right-handers Vance Worley and Trevor May to Minnesota for center fielder Ben Revere.

The Phillies didn’t have any shortage of young pitching in their farm system.

However, this trade made me elated and nervous.

Make no mistake about it – center field was the biggest gap in the Phillies line up and needed to be filled.

However, sending a back-end starting pitcher to another team with no other fifth starter on the roster didn’t seem wise when the trade was made.

The 24-year-old Revere has played two full seasons in Minnesota where he appeared to become a younger (and cheaper) version of Michael Bourn.

Some will point to the lack of power from Revere as a negative.

He will, obviously, have to work on his power, but his speed makes up for a lot on the base paths. Good Move

You probably already know that the Phillies had a bad bullpen in 2012. What you might not know is they blew a league-leading 13 leads in the eight inning last year.

A lot of the blame for that can be pointed at Antonio Bastardo and his 4.33 ERA and 1.27 WHIP.

Instead of looking for the answer elsewhere in the bullpen, the Phillies signed former Texas Ranger Mike Adams to a two-year, $12 million deal.

The deal also includes a vesting option for 2015.

If he can produce at anywhere near the same level in Philadelphia, the deal will turn out to be a bargain. Good Move

The Phillies had seen enough of John Lannan in the National League East to think that he could be their fifth starter for at least the 2013 season.

The Washington Nationals non-tendered the 28-year old rather than pay an estimated $5 million after arbitration because of their gaggle of starting pitching talent.

The Phillies swooped in and picked him up at half the price.

He should provide solid innings at the back end of a very strong rotation that includes Cole Hamels, Cliff Lee, Roy Halladay, and Kyle Kendrick. Maybe a Good Move

The last hole the Phillies needed to fill was at the hot corner. Michael Young is, apparently, the guy to fill it. The Phils sent relief pitchers Josh Lindblom and Lisalverto Bonilla to the Texas Rangers for Young.

Young hasn’t played a full season at third base since 2010, but he doesn’t seem worried about getting reacquainted because he’ll be able to dedicate all of his reps to third.

I’m not concerned with Young’s defense as much as his offense.

Veteran players notoriously see a slight dip in production when heading to a new team for the first time. That dip could be scary considering the last four years of Young’s career:

There are a few scary trends there. The first is the drop in OBP even though strikeouts are down.

The second is that the Phillies are hoping the 36-year-old can replay his 34-year-old season.

That being said, Young is a seven-time All-Star, who didn’t have his best offensive season in 2012.

“He made an adjustment in September and bounced back some [with a .361 batting average and .897 OPS in his last 20 games],” said Rangers general manager Jon Daniels.

So it gets down to which Michael Young shows up in Philadelphia. While there are many factors that will contribute to his production, he should provide a bridge to giving Cody Asche, who played last season at Double-A Reading, more time to develop. Maybe a Good Move

Ender Inciarte is a 22-year-old prospect that has yet to make it above the Single-A level in any farm system.

Many people like Inciarte’s speed (111/153 stolen base attempts) and impressive on-base percentage (.347) through five seasons.

The Phillies hope to continue Inciarte’s development and provide some much-needed depth in the outfield, but likely doesn’t have enough of a skill set to warrant a spot on the 25 man roster, and should be offered back to Arizona at some point this spring. Maybe a Good Move

Feel free to leave me a comment below or send me an e-mail at the link provided on our Contributors page .