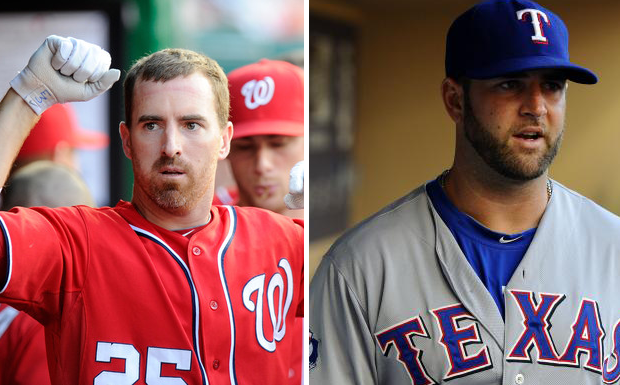 Editor’s Note: Across the Diamond: Hot Stove League Edition is a new weekly column that appears on Baseball News Source every Friday and details free agent and trade talk at every position.

Cody Ross signing with the Arizona Diamondbacks,  A.J. Pierzynski joining the Texas Rangers, and Cleveland Indians reaching an agreement with free-agent Nick Swisher over the last week are moves that have further diminished the lean pool of free agents who can fill starting roles.

Interestingly, both Arizona and Texas expect to be active in the trade market as spring training draws nearer.

The addition of Ross in Arizona was a surprise considering that the Diamondbacks have a surplus of outfielders.

Chances are, Upton, Kubel or Parra will be dealt.

Since last July’s trade deadline, speculation has grown about a potential deal between Arizona and Texas involving Upton and shortstop Elvis Andrus.

That remains a possibility, though both teams publicly appear reluctant.

The Rangers have uber prospect Jurickson Profar who can replace Andrus, and the Diamondbacks have an array of candidates to occupy Upton’s spot in right field.

On paper, it might seem that Arizona no longer needs Andrus.

Diamondbacks general manager Kevin Towers has traded for Cliff Pennington and Didi Gregorious this offseason, but Andrus would be an upgrade at shortstop.

Texas would benefit from Upton’s offense after losing Josh Hamilton and Mike Napoli to free agency.

Napoli remained in the Hot Stove League news column this week because of his lingering negotiations with the Boston Red Sox.

The catcher/first baseman agreed to a three-year, $39 million contract with Boston during the winter meetings, but Red Sox officials have yet to finalize the deal after concerns with results from Napoli’s physical.

According to multiple media reports, the Red Sox would like a shorter term deal – perhaps two years with a vesting option for a third year – to provide protection in the event Napoli suffers a hip or leg injury.

Earlier this week, several media outlets wrote that the Red Sox were talking to free agent first baseman Adam LaRoche and that at least one other team is interested in Napoli.

LaRoche, who is 33, has a two-year offer to return to the Washington Nationals, but he is said to prefer a three-year deal.

Since LaRoche received and declined a qualifying offer from the Nationals, the Red Sox would have to surrender a draft pick (their second rounder since the club’s first rounder is protected next summer) if they ink him.

Napoli is 31, and though he is below average defensively at first base, he is two years younger than LaRoche, provides a right-handed power bat which would likely thrive at Fenway Park and he would not cost the Red Sox their second round selection.

Likely, Boston will finalize the deal with Napoli or sign LaRoche since the other free agent options at first base are not appealing.

Lance Berkman is a possibility, and if the Red Sox sign Napoli, they still could bring in Berkman since he is a left-handed hitter and can play first base and left field, so he could platoon at times with Jonny Gomes and Napoli.

Aside from Berkman, the remaining names include Carlos Lee, Aubrey Huff, Casey Kotchman and Lyle Overbay.

Pittsburgh still could deal Jones as it attempts to trim payroll.

The Pirates already have Sands and Gaby Sanchez who can play first base and Travis Snider and Sands who can fill the right field role.

Jones will not be eligible for free agency until 2016, but he is projected to receive a significant raise in arbitration from his $2,250,000 salary in 2012.

Pittsburgh is seeking rotation depth and it could also use an upgrade at shortstop, which is currently manned by Clint Barmes.

Most of the difference-making free agents have already found new destinations for 2013.

When New Year’s Day passes and spring training is just six weeks away, expect the trade market to gain momentum since teams needing to fill spots in their lineup, rotation and bullpen have minimal appealing free agent targets.