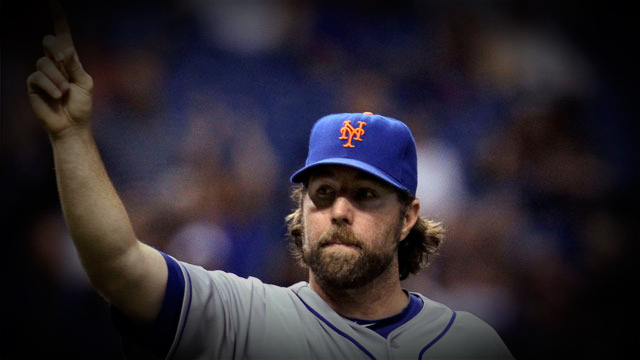 Deal is contingent on Dickey signing an extension with Toronto

The deal is contingent on Toronto being able to work out a contract extension with Dickey and they’ll have a negotiating window of 72 hours, expiring Tuesday at 2pm EST.

Dickey is under contract for next season at $5 million. The Mets attempted to negotiate an extension with Dickey, but the sides were could not agree on a new deal, after months of negotiations.

D”Arnaud is a  former first-round draft pick that was sent to the Blue Jays as part of the deal that brought Roy Halladay to the Phillies in 2009, and is the key component for the Mets in this deal.

Syndergaard  also would be a potential key component to the trade.

He was rated by Baseball America as the Blue Jays’ No. 3 prospect after last season.

Dickey  paced the NL with 233 2/3 innings pitched and ranked second with an ERA of 2.73. He made his first All-Star appearance, collected MVP votes and won the NL Cy Young Award.

Over 10 major-league seasons, the veteran knuckleballer owns a career ERA of 3.98.

A number of teams including  Texas , Baltimore, Kansas City and the Blue Jays reportedly were all involved in the negotiations with the Mets at some point this off-season.

The deal is consistent with a series of big trades and free agent acquistions the Blue Jays have made this off-season.

The Jays then  followed that trade with the signing of free-agent Melky Cabrera just a few days later to a 2-year  two-year $16 million deal.