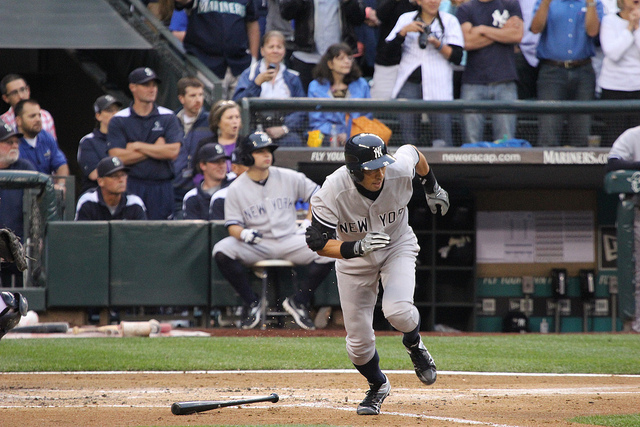 Ichiro took less money to stay with the Bronx Bombers

Ichiro Suzuki has reached an agreement with New York Yankees on a two-year deal worth $13 million. Ihe deal is contingent on Ichiro passing a physical.

The 39-year-old Ichiro hit .322 with five homers, 27 RBIs and 14 stolen bases in 67 games for the Yankees, after being acquired from the Seattle Mariners on July 23.

While the Yankees signed Hiroki Kuroda, Andy Pettitte, Mariano Rivera and Kevin Youkilis with one-year contracts, the market for Ichiro’s services may have helped him land a two-year deal.

Ichiro had drawn interest from other teams including the Philadelphia Phillies and the San Francisco Giants, who reportedly may have offered larger contracts, but Ichiro was happy as a Yankee and wanted to re-sign with New York.

Ichiro will join Curtis Granderson and Brett Gardner in the Yankee outfield, all left-handed.

The team is reportedly looking to add a right-handed option, although the list of options is limited on the free-agent market.

The Yankees are committed to cutting payroll below $189 million by 2014, and would not be interested in long-term deals for a solution to adding a right-handed bat.

Making a trade could be a more viable option. Mike Morse of the Washington Nationals is said to be on the trading block and Morse would be a perfect fit for the Yankees . The team could have interest in Scott Hairston as well.

The team will finalize the $12 million one-year contract with Youkilis today, who was signed to replace Alex Rodriguez during the first half of the season while he recovers from hip surgery scheduled for January.

The team signed catcher Bobby Wilson to a minor league contract with an invitation to spring training.