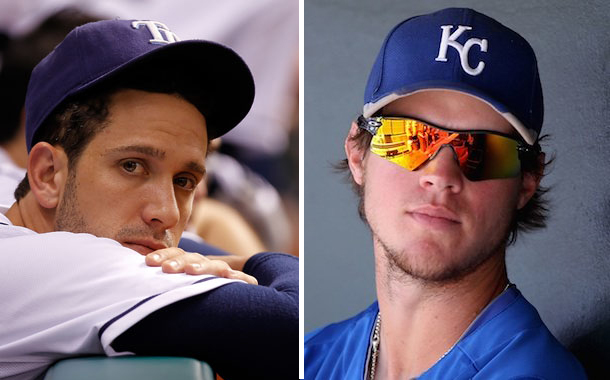 The Royals think they are a pitching staff away from being a contender. Tampa Bay needed to add some offense, organizational depth, and create some salary relief.

So the trade was made to send Tampa Bay right-handers James Shields and Wade Davis to Kansas City for uber-prospect Wil Myers,  right-hander Jake Odorizzi, left-hander Mike Montgomery and third baseman Patrick Leonard.  Based on the potential of the prospects Tampa Bay received, many opinions  side with Tampa Bay as the winners in the deal.

So lets take a look at each player and decide for ourselves.

Shields is a major league pitcher with the warrior’s temperament, a quintessential competitor. Shields has pitched 200-plus innings for Tampa Bay for six consecutive seasons.

The only other pitchers to log at least 200 innings in six straight seasons are the Jays’ Mark Buehrle, San Francisco’s Matt Cain, Yankees left-hander CC Sabathia and the Tigers ace Justin Verlander.

Drafted out of high school in 2000, Shields has spent his entire 12 year professional career with Tampa Bay.

Shields is scheduled to make $10.25 million and has a club option for $12 million in 2014 with a $1 million buyout. There’s only two players in the Tampa Bay organization that can make that kind of money, Evan Longoria and David Price , and Price is probably causing some organizational debate right now.

Tampa Bay loses a leader on the field,  in the clubhouse, and in the community. “I thought I might be able to squeeze in one more year, but that was kind of being selfish,” Shields said Sunday. He will be missed.

Kansas City got the top of the rotation pitcher they so desperately sought, and one who fits their budget.

Davis is a starter who was forced to the bullpen last year because of a surplus of pitching. To his credit he adjusted he performed well but would prefer to be a starter. In 2013, Davis would have been in the same position so adding him to the deal to make it happen makes perfect sense economically and from a roster standpoint.

Like Shields , Davis has a tenacious mound presence, a mid 90s fastball and struck out 11 per nine innings pitched last year in his new role as a reliever.

Davis started in 2010 and 2011 and should fit nicely in the middle section of the Royals rotation this year. He flourished as a reliever, going 3-0 with a 2.43 ERA.

Above all else, Davis became a more complete pitcher during his time as a reliever. He is under team control until the 2016 season. Davis may turn out to be the surprise of this deal.

To his credit Royals GM Dayton Moore has spent this off-season rebuilding the Kansas City rotation.

He re-signed Jeremy Guthrie to a $25 million, three-year deal, and took on former All-Star Ervin Santana and $12 million of his contract from the Angels.  Adding Shields and Davis became the finishing touches.

“No, it’s not easy to give up prospects,” Moore told the Kansas City Star. “But it’s important that we start winning games.”

Tampa Bay is familiar with this type of deal having traded Matt Garza at his peak of value to the Chicago Cubs for a load of prospects including starter Chris Archer, who by the way could compete for a spot in the rotation this spring, and outfielder Brandon Guyer, catcher Robinson Chirinos, shortstop Hak-Ju Lee and outfielder Sam Fuld.

That’s the kind of production Tampa Bay has coveted and the time was now to pull the trigger on a deal.

However, Myers has yet to produce at the major-league level, although most agree he will. Myers will be under team control for six years and that always figures into a small market team economy like Tampa Bay.

The opportunity is secure a prospect like Myers doesn’t come around very often and when it does you must capitalize. Myers could become a fixture in the Rays outfield and potentially a number three hitter in the Rays lineup.

Jake Odorizzi is a top pitching prospect and the 22-year-old right-hander was part of the package Kansas City landed from Milwaukee in the December 2010 trade for Zack Greinke. Odorizzi features a fast ball, a curve ball, a slider and a change-up.

Odorizzi projects as a number three starter at the big-league level.

Odorizzi will likely compete with Archer this spring for a spot on the team, but may require more time at AAA to work on his secondary pitches. He should contribute at the major-league level in 2013 at some point.

Mike Montgomery, a supplemental first rounder in 2008 who is now 23 and was rated by MLB.com as the sixth-best left-handed pitching prospect in baseball entering the 2012 season.

He started the 2012 season with the Triple-A Omaha Storm Chasers, and after going 3-6 with a 5.69 ERA to start this year, he was demoted one level to the Northwest Arkansas Naturals.

Perhaps a bit of a reclamation project, Montgomery is only 23 years old and still has a very high upside.  He will need better command to make it to the big leagues.

A change of scenery and a change of organizations is probably going to do Montgomery some good. This past year, Montgomery took a major step backward and will require some more seasoning at Triple-A Durham

Tampa Bay as a history of grooming young pitchers to become major league stars. Not so much with position players and that’s where Leonard fits into this deal.

Leonard was a fifth round pick in 2011 out of a Houston high school. A 20-year-old right-handed power hitter, he hit .251/.340/.494 with 14 homers, 30 walks, and 55 strikeouts while playing third base this year for Burlington in the Appalachian League and could eventually be moved across the diamond to first base.

If Leonard is to progress through the Rays system it will be because of his bat. At 6’4″, 225 he has the size and raw power scouts love, including those in the Rays organization.

Kansas City will likely see the more significant benefit of the trade initially, Tampa Bay may be the winner long-term.

No one can predict how prospects will perform under the brighter lights of the major leagues.

In the end all deals have inherent risk and all have potential reward. Kansas City got two major league ready starters, and Tampa Bay got prospects on the threshold of becoming major leaguers.

As for risk Kansas City has cast its lot in 2013 with Shields and Davis.

Tampa Bay still has a quiver full of pitchers and all but one fit their budget going forward.

Both teams walk away happy, for now, but in baseball every game has a winner and a loser, and as fans we feel the same way about trades.

I’ll give the edge to Tampa Bay on this one, simply based on the potential of the prospects in the deal. What do you think ?